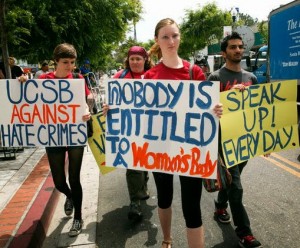 A deadly attack killed six young students at the University of California, Santa Barbara on May 23 and injured 13 others in Isla Vista, Calif. That was the toll of 22-year-old Elliot Rodger’s angry rampage, which ended when he took his own life.

Rodger had published a 141-page “manifesto” detailing his overwhelming rage toward humanity, especially women. He expressed male and class entitlement to women’s attention. In spite of his mother’s Malaysian descent, Rodger’s writings spewed hostility to Asians, Latinos/as and African Americans. Yet he reported years of anti-Asian bigotry and bullying at schools he had attended.

Rodgers was obsessed by his grievances against women and blamed them for what he termed his life of pain and rejection. In his misogynistic manifesto and a video he posted on YouTube on May 22, he announced plans for violent “retribution” against women and others who had hurt him. His first fatalities were his three Asian-American male roommates, followed by the deadly shootings of two young women and a Latino youth.

Just three weeks earlier, Santa Barbara sheriff’s deputies had visited Rodger but had not detained him; they said he did not exhibit dangerous behavior. They did not view his earlier disturbing videos.

Rather than police, shouldn’t mental health and medical professionals evaluate people’s mental health, so they can hospitalize and treat those who pose a danger to themselves and society? Instead, the criminal justice system has increasingly taken over for the mental health system, weakened by funding cuts, so the sick are put in jail or shot by police on the streets rather than hospitalized.

Since May 23, more than 1 million women have expressed their experiences with verbal and sexual harassment and assaults on social media, especially at the Twitter hashtag #YesAllWomen.

Sexual harassment is so prevalent now that 83 percent of girls 12 to 16 have experienced some form of it in public schools, reported Charles M. Blow in his June 2 New York Times column.

Though Rodger’s behavior was extreme, his ideas of male superiority, entitlement and objectification of women are rife throughout this society. These views are infused in mainstream media and culture –- in video games, on the Internet and television, including right-wing talk shows. Sexual and physical violence against women –- daily occurrences in real life — are major plot lines in profit-making blockbuster movies.

Sexism and misogyny permeate U.S. society and culture right up to the very top.  Mistreatment of women in the U.S. military is enabled by Pentagon officials and military commanders who refuse to prosecute sexual crimes. Congress recently agreed with the brass and defeated legislation aimed at holding more military perpetrators accountable for their actions.

Sexist attitudes are reinforced by college and university administrations when they ignore or choose not to investigate or penalize male students who have committed sexual assaults. Or when the victims and survivors are punished instead. This is a serious problem: one in five college women is sexually assaulted before graduation.

In the workplace, corporate bosses sexually harass and assault women employees, including immigrants, with impunity.

What is the message sent throughout society when women are discriminated against in jobs and wages, even super-exploited, and government officials let this happen? Despite women’s gains in many areas — which were achieved after years of struggle — inequality is still maintained by corporations and in bastions of academic and governmental power.

Women’s oppression, like all forms of oppression, discrimination and inequity, is inherent in capitalism. To maintain their rule, the wealthiest 1% foster a reactionary ideology of racism, sexism, anti-immigrant bias and bigotry against lesbians, gay, bi, transgender and queer people.

An independent movement of women and other progressive forces, including workers, youth and students, is needed to oppose all forms of sexism and anti-woman violence and the capitalist system from which they spring.