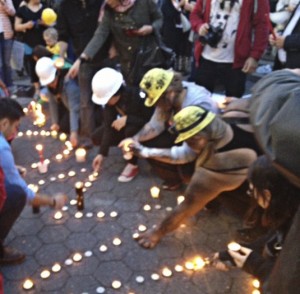 More than 100 people, mostly from Turkey, gathered in New York City’s Union Square on May 17 to honor 301 coal miners from the town of Soma, Turkey, murdered in a fire caused by unsafe conditions in a privatized mine. Some wore hard hats in tribute to the miners. Some carried signs denouncing capitalism, privatization and Turkish Prime Minister Recep Tayyip Erdoðan. They lit candles outlining the word “Soma” with flames.

One of the organizers, Suleyman Coskun, is the son of a miner. He told the crowd, “A miner is a person who goes down hundreds of miles thinking it may be his last time to see the sky. I was 6 years old when a mine in Kozlu [Turkey] exploded and 10 miners died. … In 1992 one of Turkey’s biggest mine accidents happened, again in Kozlu, killing 263 miners, many of them my father’s co-workers.

“Since then 22 years have passed, technology has progressed, and the government brags how much Turkey’s economy has improved in the last decade. … Now we have lost more than 300 miners in what is called ‘the most modern mine in Turkey.’ The government uses such terms as ‘faith’ and ‘God’s will’ to describe this tragedy; however, the only words to explain this ‘accident’ are ‘mass murder.’ …

“Mining is one of the most dangerous jobs on earth. Today the average American miner makes $80,000; a miner in Turkey gets less than $10,000. I honor those who give their lives to coal.”

Coskun closed with a poem in Turkish:

“We are miners, we are the revolutionaries
Our names are unknown
Our bodies burn, roast
Our beloved ones burn, roast
Only ashes remain, which go by the wind.”

The miners’ deaths provoked a popular uprising in Turkey, from the mining towns to the major cities. Police attacked protesters with gas and water cannons. An Erdoðan aide was caught on camera kicking a martyred miner’s relative who was being held down by paramilitary police. But the popular outrage forced the government to charge three midlevel managers at the mine and detain 25 others.