Around 80 activists gathered on May 16 in New York City to mark 66 years of Al Nakba, the catastrophe of death, destruction and mass exile which established the illegal Israeli military occupation of Palestine. Palestinian activists held banners and distributed information on the history of ongoing massacres, terrorism and ethnic cleansing committed by Israeli forces against the Palestinians, especially currently in Gaza and the West Bank. 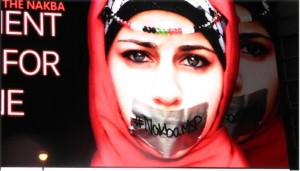 Protesters demanded an end to the military occupation of Palestine, bringing special attention to the unconditional military aid the U.S. supplies to Israel. The U.S. government has sent $30 billion over the last 10 years to fund Israel’s crimes against Palestine, along with millions more in loan guarantees, weaponry, grants and donations from U.S.-based organizations.