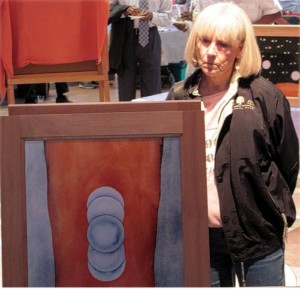 ‘The Small Ball’ names the physical reaction to what Guerrero calls ‘that well designed punishment’ of 17 months of solitary confinement. Behind the viewer is ‘The Night Watch.’ Guerrero writes: ‘There is a schedule for the officers of the night watch to count the prisoners. However, they can do it at any time of the night and day.’
WW photo: Cheryl LaBash

Washington, D.C. — Westminster Church hosted an exhibit and sale of reproductions of watercolors by Antonio Guerrero, titled “I will die as I have lived,” on May 17. Guerrero is one of the unjustly imprisoned Cuban Five, who are the focus of an international campaign to free them from U.S. prisons.

Pastor Brian Hamilton welcomed the gathering to view Guerrero’s very personal yet universal and graphic depictions of horrific U.S. prison life. A representative of the Cuban Interests Section reviewed in detail the history of terror attacks against Cuba, organized from South Florida, that caused the Cuban government to send state agents to Miami.

The convictions of conspiracy to commit espionage, said attorney José Pertierra, were made without any evidence of classified material — a first in U.S. legal history. U.S. government payments to Miami journalists, who tainted the public airways, circumvented the court’s gag order for both government prosecution and defense during the trial. The current habeas corpus appeal for a new trial is based in part on the paid journalists’ prejudiced reporting.

Two of these five Cuban heroes — René González and Fernando González — served their full prison terms, returned to Cuba and are actively pressing for the release of their comrades Guerrero, Ramón Labañino and Gerardo Hernández.

Pertierra explained that in the case of Hernández, who is sentenced to two life terms plus 15 years, even the prosecution sought to withdraw an additional charge of conspiracy to commit murder because they had no evidence. The charge was related to the 1996 shootdown of two “Brothers to the Rescue” civilian planes. Hernández was in Miami at the time the decision was made to shoot down the planes.

The U.S. government had been warned that if “Brothers to the Rescue” continued to violate Cuban airspace, as they had done multiple times, then Cuba had the right to defend its airspace. The prosecutors disputed Cuba’s assertion that the shootdown occurred in Cuban airspace, yet the U.S. government would not release satellite and other evidence that could decisively pinpoint what occurred. Nonetheless, the shootdown was clearly not the decision of an agent on the ground in Miami. Pertierra called on everyone to take this battle to the center of U.S. life, because the biggest danger is indifference.

National Network on Cuba co-chair Banbose Shango and DC Metro Coalition to Free the Cuban Five representatives Omari Musa and Óscar Ordóñez encouraged everyone to actively expand the movement to free the Five and defend Cuba’s right to self-determination. Jazz vocalist Denyse Pearson, with Lawrence Williams on guitar, performed “Guantanamera” and other selections.

Guerrero’s art will be displayed with Hernández’s political cartoons at the two-day “New Era in U.S./Cuba Relations” on June 5 and 6, part of the third “5 Days for the Cuban 5” in Washington, D.C. Events include a release party by Dead Prez on June 6, a rally at the White House on June 7 and more. Conference preregistration, housing information, schedule and more are posted at ­5daysforthecuban5.com.