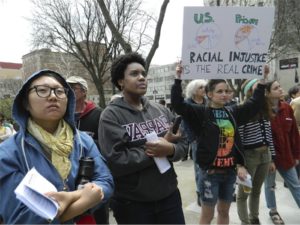 Albany, N.Y. — Over 600 people demonstrated at a statewide mobilization against mass incarceration in Albany, N.Y., on May 5. The protest was called by Capital Area Against Mass Incarceration and the New York Prisoner Justice Network, with the support of 40 prison justice organizations. The New York Free Mumia Coalition helped organize the action and coordinator Suzanne Ross spoke.

College students, along with religious leaders and families of prisoners, were among those who took part in the march. Protesters gathered outside the Capitol building demanding an end to solitary confinement, reform of New York’s parole system, release of aging prisoners and creation of a Justice Commission.

Featured speaker Dr. Cornel West underlined the connections among poverty, racism and mass incarceration. “Mass incarceration is a crime against humanity — the legacy of white supremacy.” He called prisons the “new slavery.” Others urged a fight for the rights of the 86,000 people who are confined in harsh and inhumane conditions in New York prisons.

After the rally protesters marched around local government buildings, chanting “Resist! Stand up! Prisons will close when the people stand up!”

The march proceeded inside the Capitol building. Protesters occupied several floors and hung prisoners’ letters from the ceiling. Family members and friends of prisoners convened a speak-out. There was powerful testimony about the unjust and racist prison-industrial complex, along with powerful descriptions of the daily painful experiences of prisoners.

Determined plans were made for further action. “Brick by brick, wall by wall, free our people! Free them all!”