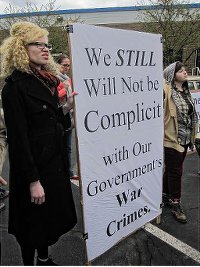 Syracuse, N.Y. — In a determined protest against the U.S. use of drone warfare, 150 people marched to the gates of Hancock Air Base in Syracuse, N.Y., on April 27. The multinational march was part of a regional day of education and action linking poverty, racism and war.

People in Afghanistan, for example, are targeted by Reaper drones piloted out of Hancock Air Base. Soldiers in the 174th Attack Wing, New York National Guard, fly the drones. The 174th previously flew F-16s; it is the first U.S. squadron to convert to all-unmanned combat planes.

Human rights groups estimate that U.S. drones have killed thousands of people in Afghanistan, Pakistan, Somalia and Yemen since 2002. On April 7, a drone strike killed more than a dozen people in Kunar province, Afghanistan, near the Pakistan border. Eighty people have been arrested in recent protests at the Hancock gates. In 2011, protesters delivered a “War Crimes Indictment” to the base.

The Upstate Coalition to Ground the Drones and End the Wars, with members in Buffalo, Binghamton, Ithaca, Rochester, Saratoga, Syracuse and Utica, called the action, which was coordinated locally by the Syracuse Peace Council.

At this action, protesters declared “A People’s Order of Protection Against Drone Terrorism” ordering the 174th Attack Wing to stop all bombing of “the children of Afghanistan, their families and their villages.”

An “order of protection” is a legal tool used by victims of domestic violence to keep their abusers at a safe distance. A court typically issues such an order against someone who harms or threatens to harm another person.

Military and local authorities have recently attempted to limit and repress anti-drone actions by issuing “orders of protection” against more than 50 demonstrators.

These orders prohibit those anti-drone activists from coming within sight of Hancock under penalty of arrest.

Some activities usually covered by an order of protection include ordering an abuser to stay away from a person and her children, move out of the family home or not carry a gun.

Currently “protected” by such an order — and thus placed in the role of “victim of abuse” — are Hancock Air Base, its 2,000 personnel and armed soldiers, and its commander. All are part of Air Combat Command, one of the ten major commands of the U.S. Air Force.

Activists are fighting in court to overturn this state abuse of an “order of protection.”

A standing-room-only, multinational crowd of more than 600 people attended a pre-march event that focused on connecting the links between poverty, racism and drone warfare.

The event took place at Tucker Missionary Baptist Church, a historically Black congregation on the South Side of Syracuse.

Dr. Cornel West, a featured speaker, is a noted African-American scholar and professor of Philosophy and Christian Practice at Union Theological Seminary. Dr. West stressed the connections between Wall Street, U.S. “imperial crimes,” the prison-industrial complex and the failure to meet people’s needs.

The audience cheered loudly when he said, “There is always money for wars and for prisons but not for health care and education.”

He added, “Capitalism is a failed system when it comes to the poor and working people.”

Sponsors of both events included United National Anti-War Coalition, local chapters of the Catholic Worker, the Green Party, the National Action Network, Veterans for Peace, and many Western and Central New York peace and justice groups.