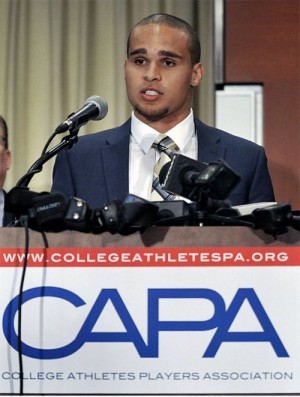 In a move that could change the rights of many of the 420,000 NCAA (National Collegiate Athletic Association) athletes, the regional director of the National Labor Relations Board, Peter Ohr, declared on March 28 that football players at Northwestern University have the right to unionize.

By debunking the concept of “student-athlete” promoted by the NCAA, this ruling declares that Northwestern University football players are workers. The ruling says in part, “It cannot be said that the employer’s scholarship players are ‘primarily students.’” This ruling applies to college athletes in the private colleges and universities but its social ramifications are far reaching.

College football players have their lives, including their ability to perform, controlled by bosses, the coaches, and they are compensated, not by class credits, but by scholarships worth around $60,000 per year. Yet they have no workers’ compensation in case of injury, which is a common occurrence for football players, college and pro.

Interestingly, the concept of student-athletes was created by the NCAA in the 1950s as a way to avoid paying millions in workers’ compensation to the family of a college football player who died as a result of playing. (Dave Zirin, Edgeofsports.com, March 30).

Northwestern football players, like college athletes across the country, face 50-hour-a-week practices with little or no control over their academic schedules. Former Northwestern quarterback Kain Colter testified to the National Labor Relations Board that he was pushed to pursue a less rigorous degree in psychology rather than studying to become a doctor because of academic scheduling conflicts with daily football practices.

Seeing themselves as exploited workers, players at Northwestern organized the College Athletes Players Association, with support from the United Steel Workers. Colter has been a leader in the campaign to unionize for better health care and limited practice hours for players. A vast majority of the team signed a petition to the NLRB to conduct a union election, making them the first college team in history to attempt to unionize. Ultimately, Northwestern players are targeting not just their university, but rather the entire system embodied by the NCAA. Addressing this, Colter said: “Right now the NCAA is like a dictatorship. No one represents us in negotiations. The only way things are going to change is if players have a union” (Dave Zirin, The Nation, March 23).

Typical of any manager or boss facing workers who want to unionize, Northwestern football coach Pat Fitzgerald responded: “I just do not believe we need a third party between our players and our coaches, staff and administrators. Whatever they need, we’ll get them.” Northwestern has appealed the NLRB’s decision.

NCAA: Champion of exploitation and racism

NCAA sports are a business worth tens or hundreds of billions of dollars. Northwestern Football, between 2003 and 2012, had a revenue totaling $235 million, while its expenses totaled $159 million, according to a report filed with the NLRB. Thus, the scholarships paid to the football players were much less than the amount of wealth they created. The most profitable NCAA football team, the University of Texas Longhorns, made $71 million in profit for the university in 2013, according to Forbes.com. While universities are faced with huge budget shortfalls, athletics represent cash cows from ticket sales, apparel and advertising, especially during March Madness, which equals more than $11 billion in revenue annually.

Like all of capitalist exploitation, the only way to make billions is to bring misery to workers. Shabazz Napier, the star senior basketball guard of the recent NCAA Division I Champion UConn Huskies, described the plight of exploited athletes, even at one of the most elite basketball programs in the country, saying: “I don’t feel student-athletes should get hundreds of thousands of dollars, but there are hungry nights that I go to bed and I’m starving. … When you see your jersey getting sold — it may not have your last name on it — but when you see your jersey getting sold and things like that, you feel like you want something in return.” Napier brought prominent coverage to the struggle of these athletes to exist and perform at the highest levels, even while their employers, the universities, make millions in profits off of their sweat. Booster clubs, which raise millions of dollars for schools like UConn, rent private jets to attend Final Four March Madness tournaments. College coaches’ salaries are 100 times more than salaries 30 years ago.

Napier’s words caused Connecticut lawmakers to consider giving athletes the right to unionize. Since UConn athletes are workers at public universities, their rights are determined by state legislatures rather than the NLRB. (Phillips, NBCSports.com, April 7).

Players at Grambling State University, a historically Black college in Louisiana with a storied football program, went on a one-game strike in October 2013. Claiming their rights as workers to withhold their labor, the players condemned the university’s treatment of the team with a long list of grievances, including the following: “In our opinion, the complex is in horrible condition, and has many hazards that may contribute to our overall health. First, the complex is filled with mildew and mold. Mildew and mold can be seen on the ceiling, walls and floor, and are contributing to water leaks because of faltering walls and ceilings” (Dave Zirin, The Nation, 10/21/13). These players also complained about not having been sufficiently fed.

For NCAA athletes, just like workers in other sectors, a major aspect of worker exploitation is racism. Black workers make up a large portion of student athletes, especially in the more profitable sports. According to NCAA statistics from 2010, 37.8 percent of male basketball players are Black, as well as 28.1 percent of football players and 20.2 percent of outdoor track athletes. Denying these workers their rights means that universities continue to profit massively off of the superexploited unpaid labor of Black people. A victory for athlete workers in unionizing is really a victory against racist oppression in all workplaces. Women student athletes should also have the same right to unionize as their male counterparts.

The efforts to unionize football players at Northwestern, or to fight for better conditions at Grambling State, are important efforts for our class, the working class, to reclaim its identity as workers. If football players can win a union, nothing can eventually stop low-wage campus workers whether custodial staff, food service workers, adjuncts and everyone else from fighting for a livable wage, benefits and humane working conditions. In the same way, graduate students at universities across the country, including the recently successful union campaign at New York University, are fighting to win their rights as workers who teach, do research and add millions in value to universities.

Universities, which are major growth industries, will continue to exploit what they call “students” until these workers assert their collective bargaining rights. Ultimately, workers at universities, including students, must unite with workers in every sector, on a global basis, to demand to live free from exploitation. The developments at Northwestern are an exciting big step forward in the right direction for all workers and deserve broad political solidarity as do all workers fighting for dignity and justice.