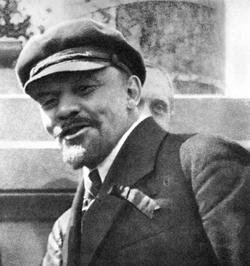 In commemoration of Lenin’s death 90 years ago. Excerpted from a talk given at the March 29, 2014, “Hard Times are Fighting Times” conference in Durham, N.C.

Just as Vladimir Lenin did in October of 1917, it is time that freedom fighters once again revisit the importance of the National Question. As thinkers and revolutionaries today, it is time that we face the reality of our constantly changing conditions. It is time we re-evaluate the ways in which imperialism and capitalist rule continue to tweak the oppression of various groups, global regions and nationalities.

I just so happen to belong to a very special but highly oppressed nation right here in the U.S. — the African American. My ancestors were forcibly brought to North, South and Central America to work for free. They were brought here in steel chains to toil the soil. They experienced the most brutal and sadistic conditions known to modern times, resulting in social conditions today throughout the Western Hemisphere of extreme institutionalized racism.

In the United States, African Americans are still kept as hostages in mass pockets of poverty. Our families and communities are being dismantled by the Prison-Industrial Complex. Our children are being stolen every day by the School-to-Prison Pipeline. Valuable members of our community are being murdered by local police departments and vigilantes with impunity. Regarding our right to work, African Americans are the last ones hired and first ones fired while Black workers are still primary subjects of racial discrimination in the workplace. In reference to the National Question and Black Liberation, African Americans are still frustrated, angry and deservedly so. As revolutionaries, we have to be honest with these conditions. We must learn about them as much as we can.

Re-examining the old and new

What the National Question forces us to do as revolutionaries is continue to seek best practices and solutions to not only workers’ rights and the exploitation of labor, but solutions to distinct groups who are oppressed in varying ways by white supremacy and to nationalities who are often forgotten or ignored by white chauvinism.

As one of the greatest catalysts of revolutionary thought, Vladimir Lenin was very aware of this particular oppression. In a 1917 pamphlet entitled “Statistics and Sociology,” Lenin writes: “In the United States, the Negroes should be classed as an oppressed nation, for the equality won in the Civil War of 1861-1865 and guaranteed by the Constitution of the Republic … in the chief Negro areas (The South).”

This was in 1917. The Southern Black Belt was where most of the African-American population resided before two waves of mass migration to the urban North. Even then, Vladimir Lenin called it right. His insight in the early 20th century was quick to recognize that capitalism, imperialism and colonialism had affected African descendants in a very unique way, especially in the U.S. Southern Black Belt. Lenin referred to the U.S. South as “the most stagnant area where the masses are subjected to greatest degradation and oppression … a kind of prison where these emancipated Negroes are hemmed in, isolated and deprived of fresh air.”

Lenin’s forethought on the National Question, and more specifically the Black Question, was light years ahead of his revolutionary contemporaries, which is exactly why current freedom fighters must once again reassess this critical question. While those of African descent continue to be lynched by the Michael Dunns and George Zimmermans, as countries like Venezuela, Haiti and Cuba continue to be assaulted by the vicious tentacles of neocolonialism and racial prejudice, revolutionaries must once again toe a tight line on this question. As Lenin so articulately noted in his 1920 “Draft Theses on National and Colonial Questions”: “The communist parties must consistently expose that constant violation of the equality of nations and of the guaranteed rights of national minorities, which is to be seen in all capitalist countries, despite their democratic constitutions … by uniting first the proletarians and then the whole mass of the working population in the struggle against the bourgeoisie, and second that all communist parties should render direct aid among the dependent and underprivileged nations.”

This was a personal reminder to all revolutionaries to actively build and connect our struggles. As revolutionaries today, we don’t have a choice but to be staunch defenders against Stop-and-Frisk. We have no choice but to be staunch defenders against the School-to-Prison Pipeline and the Prison-Industrial Complex. These are distinct policies and institutionalized practices that disproportionately seek to oppress African Americans. Driving While Black and racial profiling are parts of the fabric of imperialism. As revolutionaries guided by the principles of Vladimir Lenin, we cannot throw a blanket over such reality and simply hope for the best. As revolutionary socialists, we have to recognize the potential here. We have to embrace the possibility of building a stronger movement through supporting the National Question, regardless of what form it takes.

Through the eyes of capitalism, the African-American worker has suffered greatly. As the last ones hired and first ones fired, Black workers have been held at bay with the least pay; whether urban North or rural South, Black workers are still exploited to the highest degree. The labor movement must not only see this; it must speak power to such racist policies and continuously support resistance.

These are the same tactics the ruling class employs to intentionally prey on the poor and the proletariat, to conquer and divide our mass movement. It was Vladimir Lenin, however, who instructed revolutionary Marxists to be critical in our analysis of structural and institutionalized racism — of the subtlety of white privilege and how it affects the working class, worldwide. As revolutionaries, we have a duty to support the Black Question, to support the complete liberation of the oppressed and to seek their allegiance.

Just as Lenin possessed forethought in arming the revolution before his death 90 years ago, let us today, continue the work of building a unified front. The Black Question is not only a matter of understanding the nationalism of the oppressed, no matter the form. It is instead, a charge toward political and economic equality, toward social justice and cultural autonomy, toward the right to determine our own destiny. The struggle for liberation and self-determination is not only a political cause, but a moral charge. This is the blueprint that Lenin left to revolutionary socialism. Freedom for all is far from complete, comrades. The National Question must still be answered. Let’s go to work!

Lamont Lilly is a member and organizer of the Durham branch of Workers World Party. He can be reached via email at [email protected]