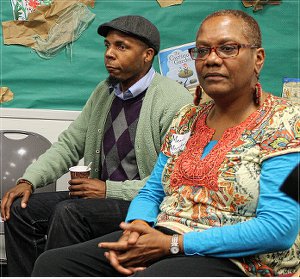 In commemoration of Lenin’s death 90 years ago. Excerpted from a talk given at the March 29, 2014, “Hard Times are Fighting Times” conference in Durham, N.C.

Vladimir Lenin was the leader of the Bolshevik Party, which led the first successful socialist revolution in modern history. Out of this revolution was born the Union of Soviet Socialist Republics, with over 100 nationalities, many of whom had their own republics. Lenin was a continuer of the teachings of Karl Marx.

Lenin described imperialism as the highest stage of capitalism, an economic system, first and foremost, with inherent governing laws. The developed capitalist countries have been driven to expand their productive forces beyond their own borders and plunder the less developed countries in order to make profits or die.

Capitalism in its earlier stage of development was based on competition, but capitalism in its highest stage is based on monopoly capitalism — that is, larger transnationals and banks gobbling up their weaker competitors. The five components of imperialism are (1) the concentration of production and capital; (2) the merging of bank capital with industrial capital, or “finance capital,” which creates a financial oligarchy; (3) the dominance of the export of capital as distinguished from the export of commodities; (4) the formation of international monopolist capitalist associations which share the world among themselves, i.e., the World Bank, the International Monetary Fund and the World Trade Organization; and (5) the territorial division of the whole world among the biggest capitalist powers.

Lenin wrote “Imperialism: The Highest Stage of Capitalism” during World War I because this “great war” was really an interimperialist war; it was a war carried out in its most brutal form by the then European, U.S. and Japanese imperialists among themselves over how to redivide the previously enslaved colonial peoples in Africa, Asia, Latin America, the Caribbean and the Middle East.

During the colonial era, whole nations of people had been forced under the whip and gun to be superexploited in order to enrich the imperialist countries to build up their economies and destroy the oppressed ones with superexploitation of labor, resources and lands. This was “territorial division of the whole world among the biggest capitalist powers” in Lenin’s “Imperialism.”

The war prompted Lenin to call for “revolutionary defeatism” — that is, for socialists and communists based in the imperialist countries to unite in calling for the defeat of their own governments, to declare that “the enemy is at home” and to turn their guns around against their own ruling class.

While calling for revolution against the imperialist governments, Lenin also called for the right to self-determination for these oppressed countries, which had historically been denied the right to develop their economies based on capitalist laws of production.

Without a clear understanding of what imperialism is as a worldwide economic system first and foremost, the chances of there being consistent anti-imperialism or internationalism is threatened.

In Venezuela, the Bolivarian Revolution was launched with the presidency of the late Hugo Chávez when he became president in 1999. The present government of Nicolás Maduro is continuing the Bolivarian revolutionary process and aspires to move in the direction of socialism. What you have in Venezuela is a long lasting dual power situation — an anti-imperialist, pro-socialist government with mass support especially from the poor versus the capitalist oligarchy class which still has a stronghold in the private economy and the media and is backed by the White House, the CIA, the Pentagon and Wall Street and is deeply connected to U.S. imperialism.

Ukraine is a more complex situation because of its relationship to Russia. It became an independent capitalist country as a product of a capitalist counterrevolution in 1991 that broke up not only the Soviet Union but earlier in 1989 took over Eastern Europe. Our party characterized this as a historic setback for the workers and oppressed worldwide and the bourgeoisie declared it as a victory. It has been the number one mission of U.S. imperialism to recolonize the world into a U.S. empire since the collapse of the Soviet Union.

This is the geopolitical context that defines this development — that being the semifascist and fascist elements who have violently ousted the legally elected government in Ukraine with the backing of the U.S. and NATO. In the process, they have outed their fascistic nature by brazenly raising the flags of the U.S. Confederacy and the Nazis. This is an attempt by the U.S. and NATO to expand more and more towards the east and further encircle Russia. It should be made clear that the Putin government is a capitalist one backed by a Russian capitalist class of billionaires and millionaires. But it is not close to being an imperialist country like the U.S. or its European allies. Russia doesn’t have military bases in over 150 countries like the U.S., not to mention the hundreds inside the U.S. in order to protect the profits of the 1%. A victory for Washington would strengthen world imperialism and be a great danger to the workers and oppressed of the world.

This current global economic crisis indicates that capitalism is at a dead end. It can no longer expand its production like during its earlier stages of development. It is in a desperate, adventurous mode which means that wars and political crises — as what is going on in Venezuela and Ukraine — can break out at any time and any place. Plus at home the masses are feeling this deepening crisis of imperialism with racism, low wages, attacks on pensions, housing, education and health care; there is crumbling infrastructure and much more but there are also signs of resistance and fightback.

This is along the same lines that Lenin raised on a much higher level: the revolutionary defeatism of one’s own government. Our movements have a strategic role to play in the South and throughout the U.S. to show our solidarity with the rest of the world by building anti-imperialist fronts, building pro-socialist fronts that will weaken imperialism at home, which will strengthen the anti-imperialist struggle abroad.

Monica Moorehead is a member of WWP’s Secretariat and editor of the book, “Marxism, Reparations and the Black Freedom Struggle.”