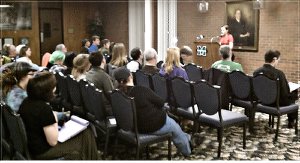 Huntington, W.Va. — A public forum titled “Water Unites Us” on Feb. 20 at Marshall University addressed public concerns about the Jan. 9 Freedom Industries spill of a coal purification chemical into the Elk River, affecting the tap-water supply for 300,000 people. The chemical spill was the largest to affect a water supply in U.S. history.

Activists with Students for Appalachian Socialism, a Marshall University-based, multi-tendency socialist coalition, along with the Ohio Valley Environmental Coalition and the Marshall University Student Environmental Action Coalition organized the Feb. 20 forum, which was headlined by an expert panel of four individuals working on the crisis in various ways. Each gave a talk and answered questions from the public.

Panelist Cathy Kunkel of Energy Efficient West Virginia highlighted that the private water company considered having 300,000 people all on one water intake to be “economically efficient.” She told Workers World, “This crisis underscores the fragility of West Virginia American Water’s infrastructure in West Virginia. For many decades, WVAW expanded and regionalized their system, putting more and more people on a single intake. Back in the 1950s, for example, WVAW had three intakes for its Kanawha Valley system, which was much smaller at the time. But WVAW argued that centralization and regionalization was the best approach because it was the economically efficient thing to do. Now we are seeing the consequences of this: the tradeoff between efficiency and local resiliency.”

‘How it is’ in ‘chemical valley’

Ethan Young, a gay Appalachian male and president of Students for Appalachian Socialism, wished to express the following statement to Workers World and the progressive community at large:

“The impact of the chemical spill by Freedom Industries and the subsequent negligence of West Virginia American Water … to shut off their water intake valve has been staggering, but it is nothing new. I grew up 20 miles outside of Charleston, W.Va., and it seemed almost weekly our local news informed the public that there was a ‘boil water advisory’ or a strange but ‘officially’ benign orange fog looming over a town right outside of Charleston.

“This is just how it is, specifically in the ‘chemical valley.’ The health of our people and the degradation of our environment are perfectly evident to every single one of us, but it has sadly been normalized and finds its solace in a concept called ‘Appalachian Fatalism.’

“The chemical leaked is used by the coal industry (which bought the shaky foundations of democracy in West Virginia 100 years ago) to remove impurities in coal heading off to power plants. We will not know the full extent of the repercussions of this incident for decades to come.

“We are not even shocked that we are going to have a generation or two of ‘guinea pigs.’ … Our water, air, soil and people have been enduring crippling conditions since the Industrial Revolution brought the railroads to the mountains. We get sick. We have elevated levels of birth defects. We watch cancer devour everyone. We drink poison. We breathe the dust off of every coal train. …

“All of this suffering has created immense wealth that is held in the hands of a few corporations in St. Louis; New York City; Washington, D.C.; etc., and it never does anything for us. We are in fact an internal resource colony for the rest of the United States. … The health of 300,000 people in our urban and heavily industrialized areas is a mere business cost that will be paid so that our resources can continue promoting higher standards of living elsewhere.

“This specific incident is only receiving the small amount of media coverage it is because it happened to our urban centers. There is, and always has been, a near blackout of information about the rural coal-producing regions. Having a conversation on the perpetual disasters of our coal country and expressing how much damage and pain it causes would take a large, voluminous text.

“Even so, it is considered acceptable to perpetuate a single-resource economic colony in Appalachia, according to the language and innuendos in the U.S., because we’re just ‘white-trash,’ ‘ignorant,’ ‘redneck,’ ‘hillbillies’ that should just be grateful to have jobs. I can honestly say that these stereotypes do not hold up against a people ethnically, socially and racially diverse and well aware of their own radical labor history.

“There is no one more aware of the cost of this industry than the average Appalachian. This is why we have been fighting back, especially over the last 50 years, with our own organizations promoting unionization and environmentalism.

“What we can ask right now from the left outside of Appalachia is to acknowledge our peculiar position as an internal colony and to begin building anti-imperialist bridges of solidarity with us. The struggle is difficult everywhere, but through our collective strength we can make the parasitic capitalist system a thing of the past.”