The following excerpted remarks were made by Eva Panjwani, a leading member of the Durham, N.C., branch of Workers World Party and a national organizer of the youth group Fight Imperialism, Stand Together (FIST) at a Feb. 28 WWP forum in New York. 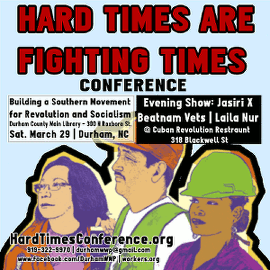 I am a queer, first-generation ­immigrant.

Structural racism and national oppression have always been strongest in the South, an anchor for how capitalism expresses itself throughout this country.

When we look at the implementation of the Affordable Care Act, a health care legislation written for and by the health care companies, every state in the Southeast and including Texas has denied the federal expansion of Medicaid, with the exception of Maryland.

Every state in the Southeast and including Texas has placed a constitutional ban on the legalization of same-sex marriage, once again with the exception of Maryland. The legacy of slavery and segregation is alive and well.

When I organize with other young people of color against the horrific cases of police murders in Durham, N.C., I remember that the first patrols were the slave catchers and that we are fighting what is in effect the new legal lynchings of Black and Brown people. Southern Workers Assemblies hash out the importance of the most basic and crucial rights denied to them on the job, including the Jim Crow-era ban on collective bargaining for public workers in North Carolina and Virginia.

We must recognize the major role of the U.S. South in the restructuring of capitalist production as part of its global strategy. Right-to-work laws are threatening to be exported to states like Michigan, no doubt playing a role in the 1%’s demolition and takeover of cities like Detroit. As of 2007, the states of the U.S. South had over 43 percent of all foreign direct investments in the U.S. — making it a major region in the global economy. By 2000, 30 percent of the manufacturing jobs in the U.S. were located in the South — these are largely nonunion. The union membership in New York state alone is greater than the union membership of the 12 Southern states combined. Southern states bid against each other, offering huge incentive packages to lure U.S. and foreign corporations to their states. As a result, the development in the Black Belt areas lags behind — leaving poor housing, schools, roads, ground wells, levees, bridges and hospitals. This underdevelopment makes the South vulnerable to natural disasters like Hurricane Katrina.

North Carolina has the most counties that participate in the Secure Communities and 287G programs of repression and deportation. The mass criminalization and deportation of immigrants from Latin America is a critical feature of this period of U.S. imperialism and capitalism. The majority of Black people — more than 55 percent — live in the South, numbering just under 19 million. Not far behind is the Latino/a population at around 16 million people.

How appropriate that this year, the 90th anniversary of Lenin’s passing and a reaffirmation of Lenin’s contributions to the movement, we remind comrades of his advice to Marxists in the U.S. to play a role in the Black liberation struggle and organize in the South.

Racial divisions are sharpest in the South in terms of where people live, worship and go to school, and in terms of income breakdowns, women’s rights, access to water and sewer systems, environmental racism, levels of unemployment, incarceration rates and rates of structural political disenfranchisement.

There is a major weakness by the U.S. trade unions and the left in not understanding the centrality of the Black national question, led by the Black working class in the South and key urban cities, in struggling for African-American self-determination.

A powerful working-class and trade union movement is critically needed in the U.S. South. The fast-food workers movement in the South has taken a critical role in the struggle in North Carolina to win the right to a union contract and a $15 per hour minimum living wage.