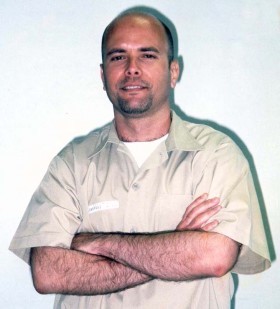 The following statement was released by Gerardo Hernández, one of the Cuban Five who remains unjustly imprisoned in the U.S. Fernando González was released on Feb. 27 and returned to Cuba.

In each of the Five there is something more or less unique about us. For example, Ramon [Labañino] is the tallest one, closely followed by René [González]. Fernando [González] happens to be the one who is the least in physical stature, while I took away second place in that category by beating out Tony [Antonio Guerrero] by a hair. Fernando’s “title” in this category [giant] is based partly on affection, but also for our deeply rooted professional custom of avoiding names, so sometimes we would call him “the small one.”

What I have said here may seem odd and flippant, but in these days of joy and anxiety, with only a few hours separating Fernando from his freedom, (and hopefully also for his quick return [to Cuba]), I am remembering so many signs of greatness inherent in our brother. I am reflecting on the irony of first calling him “small” to now referring to him as a giant of a person.

When we were arrested, Fernando had several extra reasons to feel anguish, pain, frustration. … In baseball terms, something Fernando likes a lot, he often threw complete games, but this time his mission in Miami was that of a short reliever. He was scheduled to return to Cuba soon. His wedding was rapidly approaching. His bride, the warrior Rosa who sacrificed everything in her life for him, almost had her wedding dress on. Even with all this we never heard any lamenting from the giant.

I witnessed when his lawyer from the trial, Joaquin Mendez, told him, with all his best professional advice, that given the lower seriousness of the charges against him any lawyer would suggest that he opt out and be tried separately from the others as the best legal strategy. The response from Fernando as well as René, who received a similar suggestion, was emphatic and unequivocal.

Fifteen and a half years later, Fernando, like René, will come out of prison with his head held high. They gave him nothing. His sentence was the maximum possible, and the time discounted for good behavior he earned and by law they had to give it to him.

Today those who love him and admire him will celebrate. We are convinced that our struggle will be strengthened and reinforced with another standard bearer.

We send Fernando a big embrace and say:

Thanks for your example!