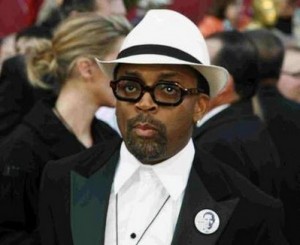 Brooklyn, N.Y. — When filmmaker Spike Lee made a series of pithy, crowd-pleasing observations opposing the racist effects of gentrification in Brooklyn, the capitalist media wasted no time in attacking him.

Lee’s comments — which received multiple rounds of applause and laughter at a Feb. 25 Pratt Institute Black History Month event in Brooklyn — were referred to in many headlines as an “expletive-filled rant” or a “profanity-laden diatribe.” As the coverage broadened from blogs to the New York Times and CNN, much of it was accompanied by bourgeois so-called “experts” defending gentrification as necessary and good.

As the audio of Lee’s comments started to go viral, the focus on swear words was meant to discredit his remarks — in the same week that ABC premiered a new expletive-filled, misogynist sitcom called “Mixology.” The new primetime show — airing in a coveted time slot — is filled with curse words, racism, jokes about domestic violence and multiple anti-woman slurs.

While “Mixology” has been soundly criticized by individual television critics and other writers, the response to its profane misogyny hasn’t approached the attention-grabbing headlines that Lee’s comments got.

That’s because the main mouthpieces of the 1% are only horrified by profanity when it’s used to truthfully call out the racism of modern-day capitalism. If swear words are used to oppress women and lesbian-gay-bi- trans-queer people and glorify rape culture — well, that’s just so-called freedom of speech.

Along with the hypocritical focus on profanity was the use of that focus to drown out voices who agreed with Lee.

The avalanche of articles decrying the “expletive-filled rant” — including bourgeois commentators defending gentrification and making personal attacks on Lee’s success as a filmmaker — were part of the ruling-class media’s drive to drown out what would, based on people’s own experiences, be a resounding chorus of agreement with Lee.

Just take Brooklyn, the focus of Lee’s comments, where in the neighborhood of Williamsburg, home prices are up 174% — from $269 per square foot in 2004 to $736 in 2012. Four of the borough’s zip codes are in the top 25 fastest gentrifying neighborhoods in the U.S.

While facts are important, they can’t replace the visceral, everyday experiences of nationally oppressed people who live in — or have been driven out of — these neighborhoods.

Sina Clark is an African-American former 15-year resident of Brooklyn’s Fifth Avenue, which until the late 1990s was a predominantly Black and Latino/a neighborhood.

That is, it was until the gentrification regime blasted through it and made it the home of upscale bars, cafes and skyrocketing rents. What was once the western, working-class edge of expensive Park Slope is now Park Slope proper. Clark told Workers World, “People walking down street treat me as if I’m not a resident there. They treat me as if I work there or — as if I work for someone who lives there.

“Their attitude toward nonwhite people who lived in the neighborhood before they moved in is superior, condescending and patronizing. It’s like you don’t exist. It’s just them and their children. You’re just some accessory that adds to the color of city life.”

Clark also notes the class dimension of this phenomenon: “The only white people who don’t treat me like that are white workers — for instance, utility workers or Con Ed employees in the neighborhood getting coffee next to me. Or other whites who’ve been in the neighborhood a very long time.”

Regarding the media backlash against Lee, Clark said, “I find it hilarious that a Black man expresses irritation or frustration using modern vernacular and he is characterized or demonized as an ‘angry Black man’ in the media. The suggestion is that he’s speaking out of turn.”

This was evidenced by typical comments on CNN.com by a bourgeois New York University urban policy professor, Mitchell Moss, who said about Lee, “He’s someone who knows how to make a movie but doesn’t know anything about cities.” Moss went on to defend gentrification: “Brooklyn has become more attractive to more people. Of course, that means some people are going to have to find other places to live, but that’s the magic of New York.” (Feb. 26)

The magic of New York is homelessness?

And who is benefiting from these investments? The profits from high-end businesses and real estate developers that get rich from gentrification wind up in the banks that are behind the entire phenomenon. Do these banks then re-invest that money and create jobs?

The answer is no. As the Jan. 14 Financial Times’ headline reported, “Productivity crisis haunts global economy.” Banks aren’t willing to reinvest money on a broad scale because of the global financial crisis. They won’t profit from it, so they see no reason to do it.

Sure, much of that money circulates among 1% Wall Street industries. But the monthly jobs reports continue to be bleak, running far below the growth needed just to keep up with population growth. Meanwhile, in December, millions of people got kicked off unemployment benefits.

The capitalist media backlash against Spike Lee had a classic effect: At the end of the week, his father’s Brooklyn home was vandalized. But the writing is on the wall for the gentrifiers, capitalists and bankers: Capitalism is at a dead end and can’t revive itself. The workers and oppressed among whom Lee’s comments are popular will replace it with socialism where housing will be a guaranteed right for all.