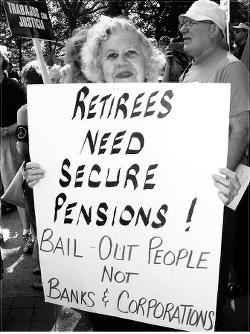 Frances Dostal, a founding member of Workers World Party who died Dec. 26, was remembered Feb. 1 in Cleveland by more than 100 comrades, friends and movement activists.

The comments, anecdotes and solidarity messages wove together a number of common threads. Frances and her life partner Ted Dostal — who died in 2003 — were stalwart activists who rarely missed a demonstration. They were committed anti-racist fighters and solid supporters of the women’s and lesbian, gay, bisexual, transgender and queer movements.

Frances, a registered nurse, never failed to support nurses fighting for better conditions or union recognition. She was remembered as a revolutionary communist who taught and mentored young people turning to Marxism. Speakers referred to her keen intelligence, her welcoming disposition and her warm smile — and her admonitions to comrades to take care of their health.

Many Cleveland activists paid tribute to Frances. Barbara Keenan, who met Frances and Ted in the early 1960s when they were still in Youngstown, Ohio, recalled a struggle at Youngstown State University to end the harassment of a student with progressive views. Yoshiko Ikuta, who gave greetings on behalf of Women Speak Out for Peace and Justice, knew Frances first as a union activist at Kaiser Community Health Foundation. Jerry Gordon explained that even though they often disagreed with him, Frances and Ted “were never sectarian.” Mark Bailey, who knew her through weekly peace vigils — the longest ongoing anti-war protest in the country — called her “a goodwill ambassador for Marxism.”

Louise Lusczak described being on a pro-choice demonstration and, after realizing her own mother was among those protesting on the other side, finding comfort in Frances’ wise counsel. Victoria Carter remembered immediately gravitating to the Dostals, whom she met in the anti-war movement when she first moved to Cleveland. Alan Roth, now in New York, met Frances in 1970 after returning from a trip to Cuba and seeking a revolutionary socialist organization. Gene Shepherd spoke on behalf of the Ohio Nurses Association and named some important Ohio union struggles that Frances was involved in, such as the “mass resignation” in Youngstown when it was illegal for nurses to strike and the 1980-1982 Ashtabula nurses strike.

Brother Abdul Qahhar, Cleveland chair of the New Black Panther Party and one of the Louisville Seven — Panthers who beat trumped up charges in the 1970s — said Frances’ spirit was “the pro-humanity spirit of the ancestors” and that “to be a revolutionary is to be chosen to make sure the planet is run right.” Brother Qahhar led the successful fight to free New York activist Abdul Haqq, framed for a Cleveland murder, which Frances and Ted were very active in.

Richard Harris of Youngstown, a close friend of Workers World Party, met Frances at a meeting in 1961 to support Mae Mallory. “I started talking to Ted and Frances and we’ve been talking forever. She was a strong woman,” he said. At the time, Mae Mallory was fighting extradition from Cleveland to Monroe, N.C., over false kidnapping charges against her and Robert Williams. The real reason they were targeted was that they supported the right of the Black community to physically defend itself from the Ku Klux Klan.

Stewart and Valerie Robinson read a poem written for Ted and Frances in 1993 by the late poet laureate of Cleveland, Daniel Thompson. “Fran, we need a thousand like her,” was one of the lines.

Workers World members from Buffalo, Detroit and New York, as well as Cleveland, paid tribute to Comrade Frances. Jerry Goldberg of Detroit said that, while revolutionaries might become estranged from their biological families, “we have to be each other’s own family, and Frances understood that better than anyone else.” Caleb Maupin of New York, who joined WW in Cleveland, recalled his first encounter with Frances, at a play about Karl Marx. During a question-and-answer session after the play, she immediately raised her hand and asked, “Why didn’t the play say anything about Marx’s involvement in the fight to abolish slavery?”

Jeremy Radabaugh of Huntington, W.V., was impressed with Frances’ knowledge of theory and history during an all-night conversation on a bus trip to Washington, D.C., for a protest. Tom Scahill of Buffalo reminded us that Feb. 1 was the anniversary of the death of the founding chairperson of WW, Sam Marcy, in 1998, and remembered other founding members no longer with us: Vince Copeland, Libby Ross, Dotty Ballan, Ed Merrill and Artie Rosen. “Frances was an unshakeable revolutionary optimist,” he stated. Susan Schnur of Cleveland WW read solidarity messages from many WW branches and a number of comrades and friends. Schnur said, “Frances explained to me that the so-called ‘battle of the sexes’ is really about dividing the working class.”

Sharon Eolis, a retired New York nurse, spoke of meeting Ted and Frances in 1959 and the many conversations they had on health care and organizing over the years. She also recalled the defense work for Mallory and Williams. The Dostals traveled back and forth repeatedly from Youngstown to Cleveland and put their house up as collateral to make bail for Mallory.

Martha Grevatt, a long-time member of Cleveland WW now residing in Detroit, explained Ted’s arrest in 1968. Ted and Frances were supportive observers at a demonstration in defense of Black Nationalist leader Ahmed Evans. Out of respect for Mallory’s desire that this be a Black community demonstration, they did not picket. “In Workers World our white comrades do not tell an oppressed nation how to conduct the struggle. Ted and Frances understood that.” The police nevertheless arrested Ted, and he served almost six months for contempt of court — a punishment for Frances as well.

Teresa Gutierrez, speaking for the Workers World Secretariat, said, “I’m honored to be representing our New York leadership. Frances was a true comrade, with a big C. I am so glad that she and Ted could visit Cuba to get a glimpse of the kind of society they dedicated their entire lives to building. We dedicate ourselves to bringing socialism to the U.S.”

Led by Sharon Danann of Cleveland WW, the crowd sang “Solidarity Forever” and then closed with “The International.”