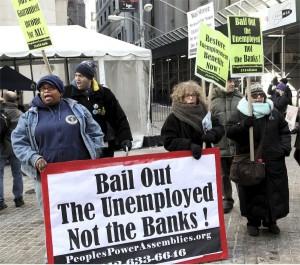 Under the slogan “Rise up for the unemployed,” the People’s Power Assembly and OccuEvolve held a protest Feb. 7 on Wall Street, a few hours after the government released the latest employment figures.

The protest demanded restoration of extended unemployment benefits and jobs for all at a living wage. It also raised the issue of the banks’ attacks on the pensions of Puerto Rican workers with the recent assault on the island’s credit ratings.