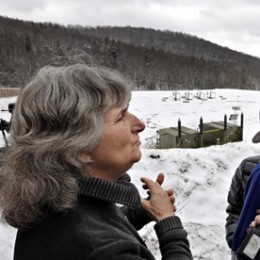 Northeast Pennsylvania’s Marcellus Shale is ground zero for the impact of hydraulic fracturing — fracking — on rural communities. The process involves injecting millions of gallons of water and sand laden with toxic and carcinogenic chemicals deep into underground shale formations to release natural gas.

Marcellus Shale is typical of many economically depressed regions in the U.S. where fracking has occurred. With no sustainable industries to provide jobs, local economies were severely depressed. By offering monetary incentives to residents willing to lease their land for drilling, oil and gas companies have driven a wedge between residents who oppose drilling and those who see it as a ticket out of their impoverishment, regardless of the cost to their health and the environment. While some see fracking as a panacea, others see it as a force of devastation in the heart of their communities.

One who has long held the latter view is Vera Scroggins, a resident of Silver Lake Township and a longtime vocal community activist. For the last five years, Scroggins, a 63-year-old grandmother, has organized tours of frack sites to raise awareness of their environmental impact. She is a frequent caller to health and environmental regulators when violations occur.

Scroggins has posted around 500 videos on YouTube documenting contamination of creeks from drilling, destruction of forest lands for pipelines, nighttime flares from drilling rigs, air contamination from compressors and more. One of Scroggins’ primary targets is the Houston-based Cabot Oil & Gas Corp., which was fined for permanently contaminating residential water wells in Dimock, Pa., in 2010.

It was only a matter of time before Scroggins’ efforts to expose the harmful environmental and health impact of Cabot’s operations led to a backlash from the company. In October 2013, Cabot filed an injunction against Scroggins, prohibiting her from setting foot on any land where Cabot holds drilling leases. This covers 312.5 square miles and includes nearly 40 percent of Susquehanna County, where Scroggins lives.

Given less than 72 hours’ notice of the injunction hearing, Scroggins was unable to secure an attorney to face off against Cabot’s bevy of four lawyers and nine witnesses. Scroggins did have three witnesses at the hearing, who testified that she followed safe practices while conducting her site tours.

Judge Kenneth Seamans granted a temporary injunction on Oct. 21, yet did not require Cabot to identify any of the lands where it holds leases. Scroggins was left to figure out for herself what areas she was legally barred from. A hearing scheduled for March 24 will determine if the ban will be permanent.

It turns out that Scroggins risks fines and arrest if she goes to the new county hospital or visits her health clinic. She cannot enter the supermarkets or drug stores where she shops, take her grandchildren to a favorite Chinese restaurant, do business at her bank, visit the animal shelter, or go to the bowling alley, recycling center, golf club or lake shore. These facilities all lie on land Cabot leased for drilling.

A paid spokesperson for “Energy in Depth,” Tom Shepstone, had the audacity to portray Scroggins as a public menace for “trespass[ing] on the soul of the community.” EID is a pro-oil and pro-gas drilling industry front group whose practice is to malign the anti-fracking movement. Scroggins noted that Shepstone, who once made the outrageous statement that “natural gas drilling is not only environmentally responsible, but essential to health,” doesn’t even live in her community.

Cabot’s injunction accused Scroggins of exposing the company and workers on the sites to potential safety hazards. It’s hard to escape the irony that the drilling company is clearly the source of potential and existing safety risks.

Attorney George Kinchy, who has since been retained as Scroggins’ lawyer, questioned Cabot’s legal right to restrict her access solely based on leases they hold in the county. “They have no proof that they had the right to exclude her. They didn’t present evidence of leases that gave them the right to treat the property as their own,” he said. (Mother Jones, Jan. 29) Kinchy also noted that this was the first time a company has used the courts to go after an individual anti-fracking activist.

The injunction is clearly intended to silence dissent against corporations like Cabot. Scroggins told Workers World, “This is an intense form of abuse of my civil rights and shows the arrogance of the gas industry in wanting to trump the Constitution to promote their agenda and to stop any citizen objections and resistance.”

Scroggins will be filing an appeal to vacate the injunction, and received notice on Feb. 3 that the Pennsylvania American Civil Liberties Union will provide support for her case.