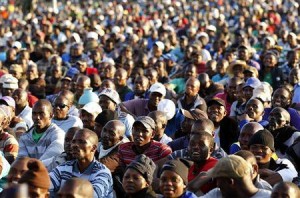 South African miners during strike in Marikana on Jan. 30.

Feb. 3 — A government mediation team is seeking to resolve the ongoing strike in the platinum industry in the Northwest Province of South Africa. Talks were suspended until Feb. 4 as the world’s leading platinum mine producers remain stifled by strike activity which began Jan. 23.

Mine owners have threatened to lay off workers if the strike does not come to an end based on the bosses’ terms. Since 2012, there has been a series of strikes and incidents of violence in the platinum mines around Rustenburg, the center of the industry.

The Commission for Conciliation, Mediation and Arbitration has put forward a plan to end the strike, but details have not been made public. “The mediated proposal or a variation thereof could form the basis of a final settlement in this dispute,” Nerine Kahn, the director of CCMA, said in an official statement quoted in Feb. 2 Reuters.

This work stoppage was called by the Association of Mineworkers and Construction Union, which is a breakaway group from the National Mineworkers Union (NUM), an affiliate of the Congress of South African Trade Unions. AMCU has taken away tens of thousands of workers from the NUM, particularly in the so-called platinum belt in the Northwest Province.

The overall politics of AMCU are not clear. Some have suggested their opposition to NUM, COSATU and the ruling African National Congress stems from their anti-communist beliefs.

As a result of the continuing turmoil in the Northwest mining region, company executives are escalating their previous threats to downsize the workforce. The strike has spread with the intervention of the National Union of Metalworkers of South Africa, the largest union within COSATU, which downed its tools on Feb. 3.

NUMSA has generated controversy in recent months with its criticism of the current leadership of COSATU, going so far as to say that they will not support the ANC in the upcoming elections in April or May. NUMSA is striking against the Anglo American Platinum (Amplats), whose headquarters is now listed in Britain.

According to Feb. 3 Bloomberg, “Anglo American Platinum Ltd. (AMS) will cut as many as 1,400 jobs as a strike that has shrunk output at the biggest producer of the metal by half headed for a third week. The cuts planned for this year follow a loss of 7,438 jobs in 2013 as the Anglo American Plc (AAL) unit known as Amplats merged five mines at its Rustenburg complex into three.”

Anglo American CEO Chris Griffith said that between 1,200 and 1,400 workers will be downsized during 2014. “By the end of this year we expect that job will be complete. If there are vacancies across the group, we will be able to redeploy those people.”

AMCU is demanding the doubling of monthly wages for their workers to 12,500 rand (approximately $1,108 U.S.). The company says that it cannot afford that and offered the workers a raise of 9 percent, which was rejected by AMCU.

Despite the bosses’ claims of potential financial ruin in light of persistent labor actions, Bloomberg reported Griffith as saying, “Amplats today [Feb. 3] posted a return to full-year profit helped by rising sales and a slide in the value of the South African rand. It’s on course to achieve a targeted 3.8 billion rand of savings within three years through the Rustenburg restructuring after achieving 1.9 billion rand of savings last year.”

With presidential and parliamentary elections taking place in three months, the ANC and opposition parties are seeking to build campaigns at winning over voters. The ANC Manifesto for 2014 is calling for the creation of 6 million jobs and faster land reform geared toward redistribution to the indigenous African population. The South African masses remain disproportionately impoverished and landless after two decades of national independence from apartheid.

Launching the ANC Manifesto has drawn tens of thousands of people to rallies across the country. A special appeal is being made to the youth, the so-called “born frees,” who came on the scene after the overwhelming 1994 electoral victory by the ruling party in the first non-racial democratic election in the country’s history.

Opposition parties are scrambling to develop an electoral strategy to challenge the ANC. The largest opposition party, the Democratic Alliance, is a white-dominated organization with a minority presence in parliament, which maintains control of local and provincial governmental structures in the Western Cape Province.

The DA attempted to recruit Dr. Mamphele Ramphele, a former comrade of the late Black Consciousness Movement presidential candidate and leader, Steve Biko, who was assassinated while imprisoned by the white-minority regime in September 1977. Ramphele, who never joined the ANC even during the height of the anti-apartheid struggle during the 1980s and early 1990s, formed her own political party, Agang, in 2013, saying she would run against President Jacob Zuma.

Ramphele reported at a Feb. 3 press conference, however, that the purported merger between Agang and the DA was off and that she would not be running for president on the slate. These developments have strengthened the position of the ANC, which had labeled Ramphele as a “rent-a-black-face” candidate for the DA.

The outcome of the national elections will depend upon voting patterns of the youth, workers and people in the rural areas. With turmoil in the mining sector, it remains to be seen how rank-and-file members of the trade unions will vote.

Even though NUMSA has made statements critical of the ANC and its economic policy and the role of the trade union movement in the Tripartite Alliance of the ANC, COSATU and the South African Communist Party, this may not translate into broad defection from the ruling party by rank-and-file union members and people in the cities, countryside and outlying townships.

Whatever the outcome of the elections, the people of South Africa will still face the burgeoning crisis of the world capitalist system. They can only hope to reverse deteriorating social conditions with a sharp move to the left that addresses the wide disparities between African workers and the owners of capital.