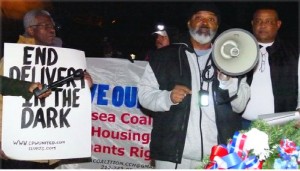 Washington, D.C. — Letter carriers and community supporters assembled in the midst of hundreds of people at the recently dedicated national Martin Luther King Jr. Memorial statue in Washington, D.C., on Jan. 20, the official Martin Luther King Jr. Day holiday. King’s life was dedicated to making change, and the letter carriers and their supporters were there to demand changes of the United States Postal Service. They were also present to commemorate the life of African-American letter carrier Tyson Barnette, who was slain by gunfire as King was.

Barnette’s mother, Bridget Barnette, and six other members of Barnette’s family joined the event, traveling 425 miles from their homes in Rock Hill, S.C. They came to join the call for safer working conditions for all letter carriers, almost two months after the 26-year-old was killed while delivering mail in the Washington suburb of Cheverly, Md., at 7:30 p.m. in the dark. The killing of the postal worker, who had just six years seniority, is still unsolved.

Processing delays caused by the elimination of hundreds of processing plants, massive understaffing in the clerk craft, and mismanaged and flawed automation schemes have caused letter carriers’ start times to be pushed back to later in the day, when safety issues can become deadly.

“Make changes. Don’t let another life be taken with something that can be fixed as easily as pushing the time back in the morning and getting [the letter carriers] started earlier,” Bridget Barnette told onlookers.

The rally started at sunset, followed by a march to U.S. Postal Service Headquarters at L’Enfant Plaza. The march took place in the dark to point out that letter carriers’ jobs have become more unsafe since the Postal Service instituted later work days. Participants included some of Tyson Barnette’s Landover, Md., post office co-workers, D.C.-area postal workers, and community and postal activists from Baltimore, Philadelphia and New York City.

Organized by Community Postal Workers United, Postal Defenders, and Community Labor United for Postal Jobs and Services, protesters chanted: “No dark deliveries!” and “What do we want? Safety!” in opposition to the large increase in mail delivery shifts after sunset over the last few years.

Communities of color and women are especially hard hit by problems in the post office, which has a workforce that is 21 percent Black, 8 percent Latino/a and 8 percent Asian-American/Pacific Islander and Native American. Women make up 40 percent of the workforce.

Chelsea Coalition on Housing for Tenants Rights organizer Johnnie Stevens pointed out that decent wages won through union struggles have allowed postal workers to buy homes and send their kids to college. Recently instituted USPS pilot programs to open retail centers at Staples stores, run by low-paid, nonunion workers, threaten to undermine those wages and have to be stopped by community and postal workers together, he told the crowd.

At the USPS Headquarters, a wreath was handed over to a postal representative as about a dozen cops stood by in front of the building’s glass doors. The representative was also given a list of demands printed on a large placard, which included: End delivery in the dark; start letter carriers’ shifts earlier; fully staff clerk and carrier positions; adjust overburdened routes; and reopen mail processing plants.

Most D.C.-area television stations covered the rally and march extensively.