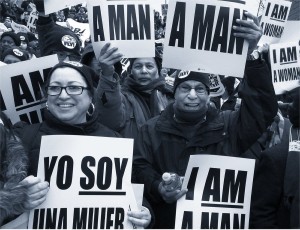 Local 32BJ of the Service Employees union organized a protest on Dr. Martin Luther King Jr. Day, Jan. 20, to demand the day as a paid holiday for airport contract workers. Hundreds of workers marched across the LaGuardia Airport access bridge in Queens, N.Y., after the airlines and the Port Authority of New York & New Jersey repeatedly refused to make MLK Day a paid holiday. These workers also want 32BJ recognized as their union.

There was broad community support for the protest. About 30 people, including 32BJ President Héctor Figueroa, Rep. Charles Rangel and some members of New York’s City Council and State Assembly, sat down on the bridge in a preplanned civil disobedience and were arrested.