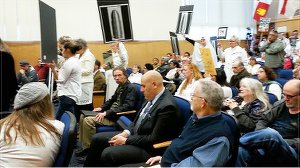 Santa Rosa, Calif. – Supporters demanding justice for Andy Lopez, led by the Mothers in White, packed a Sonoma County Board of Supervisors (BOS) public hearing on Jan. 7. Thirteen-year-old Andy Lopez was killed by Deputy Erick Gelhaus, Santa Rosa Sheriff’s Department, on Oct. 22 as Andy was returning a replica AK-47 BB gun to his friend’s house. Ever since the killing, the streets of Santa Rosa have been filled by young, mostly Latino/a students demanding justice for the loss of his young life.

The community was recently further enraged upon hearing that Deputy Gelhaus was returning to work, albeit on desk duty. No charges have been filed against this deputy, despite the blatant circumstances under which Lopez was killed. Gelhaus pumped at least seven rounds of bullets into the 13-year-old’s body within two to three seconds of “shouting” an order to the Latino child to drop the gun.

Over 50 members of the community testified at the hearing. Dara McCuistion, one of the Mothers in White, said to the supervisors: “You have terrorized an entire community. It tells the community that it’s open season on Mexicans. … Arrest Gelhaus!” Nicole, the mother of Andy’s best friend, talked about how her own son must testify in a case about the murder of his sister, and he won’t have his best friend at his side during this trying time.

Sixteen years ago, the U.S. Civil Rights Department investigated officer-involved- shootings in Sonoma County. The resulting recommendations they issued in 2000 were never implemented. Since then there have been 37 civilian deaths in Sonoma County related to police shootings. Since the Lopez killing, the BOS has approved a park on the site of the Andy Lopez memorial, the place where he was killed, and formed a long-sought-after Community and Local Law Enforcement Task Force.

Albert Howard, referring to other law enforcement killings as well, described them as “wanton outright murders wrapped in veils of secrecy — those who murdered our youth protected by those elected to serve us … shoot to kill and leave no witnesses” at the hearing. The latter comment referred to lessons by Gelhaus, a Sonoma County firearms instructor for 19 years. In a 2008 article for the monthly policing and gun rights magazine, S.W.A.T., Gelhaus gave other officers advice on what to do if the possibility arises: “Today is the day you may need to kill someone in order to go home. If you cannot turn on the ‘mean gene’ for yourself, who will? If you find yourself in an ambush, in the kill zone, you need to turn on that mean gene.”

Another speaker, Ramon Cairo, from Brown Berets of Sonoma County, said: “A predator came into our community and murdered a child. It’s hunting season, and if you happen to be a minority, the mark is on you!” Addressing the supervisors, he added, “Silence is complicity.” Alice Loaiza, of Marcha Patriótica – Capítulo, California, spoke about how “the name of Andy Lopez is known all over Latin America.”

On Jan. 2, a memorial altar erected on the site where Andy was killed caught fire under suspicious circumstances. The community quickly rallied and rebuilt it two days later.