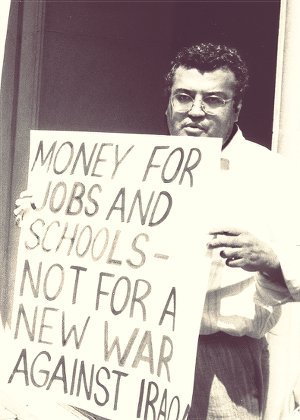 I met Milton roughly 30 years ago when I was working at Casa Nicaragua, during a time of tumultuous revolutionary struggles throughout Latin America and the world. I would always see Milton at organizing meetings, but we didn’t get to know each other better until Comrade Rafael Ramos formally introduced us.

Milton was a revolutionary and strong advocate for his beliefs. He joined Workers World Party because he wanted to make the world a better place and was optimistic that it could happen. He was convinced that socialism was the path through which the working class, and by extension the world, would improve.

Milton was warm, generous and empathetic. He loved life and wanted to spread his optimism to others, and his outgoing nature made it easy for him to do so. I was here illegally at the time and was very shy, but Milton made it easy to become close. I found that he understood the struggles of undocumented people, and he would go out of his way to help me, even going so far as to assist in legalizing my status.

I was not the only one he helped. Milton would try to get people jobs, give them money in their times of need, and always had his apartment door open, making sure people felt at home. He would listen to anyone who would come to him for help, be it emotional or physical. This was particularly true with party members, who he considered his second family.

Milton was a family man who was always concerned about the well-being of his children. He visited them often and made sure they were both financially and emotionally cared for. He tirelessly advocated for family unity, so that all branches of his family loved and respected each other.

Milton’s impact on our lives cannot fully be described in words. He will live on through the lessons he taught, the jokes he made, the love he provided and the concern he showed for his fellow human beings and his commitment for social justice and equality. Our memories of him serve as the best testament of the kind of man he was, and our actions moving forward are the best way in which we can honor him. While he will be missed, I know that more than sorrow from his death, he would want us to remember the joy that he spread in our lives. Milton Vera ¡presente!

Workers World Party will be holding a special memorial for Milton Vera.