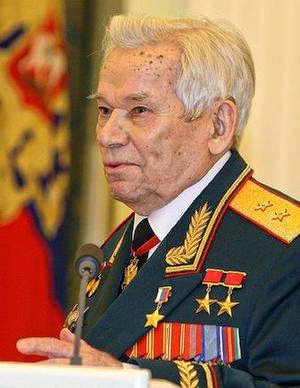 Mikhail Timofeyevich Kalashnikov, the designer of the famous AK-47 assault rifle, died at the age of 94 at the end of December 2013 in Izhevsk, Russia, where he had lived in a simple apartment house since just after World War II.

He was the 17th child of a peasant family, born in western Siberia.

Kalashnikov had fought in World War II as a tank commander. He started developing his weapon designs while he was recovering from wounds in a military hospital.

Even though he had left school after the seventh grade, the Soviet army, recognizing his talent, trained and encouraged him to develop weapons that the Soviet soldier needed to fight effectively.

The AK-47, a simple and reliable automatic weapon, went into production in 1947. It was carried by the Vietnamese in their thirty-year war against the French and U.S. imperialists and made such an impact on liberation struggles in Africa that a number of newly independent states put its outline on their flag or coats of arms. To Russian communists, this gesture was the best reward Kalashnikov ever received.

Kalashnikov became a communist in 1952 and never wavered. He remained faithful to the ideals of socialism.

In a message to the Central Committee of the Communist Party of the Russian Federation, he said: “Under the leadership of the Communist Party, my generation won a terrible war, built a powerful state, opened the path to outer space, created major artistic works and technical models. Today, Russian communists are the creative force that aims to recreate a great and strong nation. I am sure that the communists will not disappoint us.” ­­(solidarite-internationale-pcf.over-blog.net)