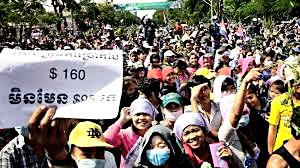 When the police in Cambodia shot and killed four people Jan. 3 during a workers’ demonstration calling for higher wages in the garment industry, it got the attention of the media in the imperialist world. The story, as they presented it, was a simple one: The Cambodian government was repressing workers seeking a living wage.

Garment workers in Cambodia earn $80 a month for a six-day, 48-hour week. They are demanding their pay be raised to $160 a month.

The reports all added that the head of the opposition party supported the workers’ demand.

But what is the back story that the media have ignored so far?

First, there is no mention that Cambodia was invaded and bombed many times by U.S. forces during the Vietnam War. The infamous fatal shootings of unarmed students in the U.S. in May 1970 at both Kent State in Ohio and Jackson State in Mississippi by National Guards and police, respectively, took place during demonstrations against the war’s expansion into Cambodia, which President Richard Nixon had finally made public just days earlier.

In reporting on the struggle of garment workers today, the impact of that war on the people of Cambodia, their political structures and their economy is treated as a non-issue, even though it left terrible scars that set the country back in many ways.

There is also no mention of the role of the billion-dollar garment companies that subcontract work to local entrepreneurs in Cambodia. The Gap, for instance, is the largest buyer of garments made in Cambodia. Fred de Sam Lazaro of the PBS NewsHour reported last spring that “there are perhaps 400,000 garment workers in more than 300 factories in and near the capital, Phnom Penh. They are subcontractors to brand names and retailers in Europe and America.” (PBS, May 31)

On that same program, Bobbi Silten of The Gap said: “We have very longstanding relationships with many of the vendors in Cambodia. It’s been one of our top 10 sourcing countries for the last 10 years. So we are very committed to being there, and we think that the labor standards that they have put in place is one of the reasons why we continue to stay.”

In other words, they went to Cambodia precisely because they knew it was so poor and underdeveloped, largely because of the war and its aftermath, that they could force the government to set lower wages than in other countries in the region, like China, where wages have gone up somewhat after years of worker organizing and struggles.

Next time you go into a garment chain outlet, look at the labels. “Made in Bangladesh” and “Made in China” have been replaced by “Made in Cambodia” and “Made in Vietnam.”

Billionaire chains threaten to pull out

There is an organization called the Garment Manufacturers Association in Cambodia whose members are subcontractors for the giant garment chains. The head of it, Ken Loo, has called the striking workers “hooligans” and is telling the Cambodian government not to accede to the workers’ demands. “If the government demonstrates that it has the will to maintain law and order, then I think investor confidence will be regained and, going forward, [it] might be a turning point for the industry. However, if the government allows the situation to go back to what it was before, then I think many investors are ready to leave,” said Loo. (Channel NewsAsia, Jan. 6)

This is what has the Cambodian government worried: that the companies whose orders are now filled by some 400,000 garment workers will find someplace cheaper and leave them high and dry. At least, that is the threat. That is where the pressure is coming from.

That’s what workers in the U.S. need to know: The enemy of the people of Cambodia is the same as their enemy. It’s the billionaire ruling class, centered mostly in the imperialist countries, whose operations have become global and who pit workers everywhere against each other in a race to the bottom.

The reports in the capitalist media here on what happened make it seem like the answer for the Cambodian workers can be found at the ballot box. They are boosting the credibility of the leader of the political opposition party, Sam Rainsy, who they say supports the workers’ demands.

But who is Rainsy? He is a former investment banker, educated in France, the former colonial ruler over Cambodia. He was charged with “racial incitement” in 2009 for having led anti-Vietnamese protests along the border. He fled to France to avoid a trial, but was found guilty in absentia and sentenced to 10 years in prison. In a political deal that shows he has powerful outside support, he was later pardoned by King Norodom Sihamoni and returned to Cambodia, where he set up an opposition political party.

The workers of Cambodia are in a righteous struggle to win improvement of their wretched conditions. They are like workers everywhere who are fighting global capital, which threatens to undercut them completely if they rise up and fight.

Unions in the wealthier imperialist countries will be advancing the rights of workers at home, too, by giving support to these super-exploited workers in Cambodia. But they should not fall into the trap of embellishing politicians like Rainsy, whose demagogic support of the workers conceals his reactionary aim: to tighten the noose of capitalism around their necks.