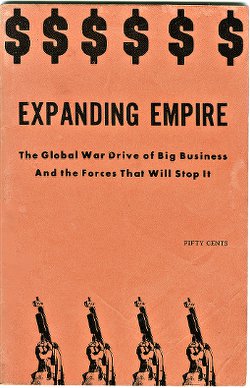 Vince Copeland, a founding leader of Workers World Party, first published a riveting booklet in 1968 entitled “Expanding Empire: The Global War Drive of Big Business and the Forces That Will Stop It.” Its popularity was expressed in several subsequent printings. In this writer’s view, it is a must read or a must revisit at the earliest opportunity for those involved in the work of study or organizing or both.

“Expanding Empire” maps out quite well the links between past and current publications that expose the deleterious impact this greedy practice of land and resource theft has on the world in general, and specific regions in particular. Empire-building endangers the entire planet. Workers the world over must resist it. Copeland succeeds in providing us with more effective intellectual ammunition to do just that.

Rereading “Expanding Empire” places Gen. Smedley D. Butler’s (U.S. Marine Corps) remarks in a renewed, deeper context; breaking down in simple yet complex terms the following notion: “The flag follows the dollar and the dollar follows the flag.” (p. 39) The dollar symbolizes big business and the flag, the U.S. military. This symbiotic relationship found genocidal expression in Manifest Destiny in the U.S. and in Kipling’s “take up the White Man’s burden,” excusing British imperialism.

Eisenhower dubbed it the “military-industrial complex.” Gil Scott Heron illustrated it verbally in a song, “Work for Peace,” talking about the “military and the monetary.”

“Expanding Empire” is a tome that handily succeeds at unmasking the real motives behind capitalism. As a system, capitalism is mandated to confront and grapple with the inherent problem of having to “expand or die.” It is a domestic and international albatross around the neck of finance capital. Every aspect of living is at stake for millions. Control of resources and markets in pursuit of domination or monopoly is the insatiable goal of the capitalists. Nothing is sacred. Force is only one of its insidious weapons.

An excerpt from the impressive jacket cover is spot-on: “The basic cause of the U.S. invasion of Vietnam lies deep within the economic and social system of the United States itself. The aggression was built in, and the Asian War was predetermined before Lyndon Johnson was born.”

Leopards don’t change their spots. When any U.S. president jumps up and tries to lay down another lie-filled rationale for war, workers would do well to remember another profound point generated by Copeland: “From the Philippines in 1898 to Vietnam in 1968, one U.S. administration after another has planned the conquest of Asia. Why — and for whom?”

The Middle East, too, has always been in the gunsights of U.S. imperialism for the last 100 years! The history and behavior have been quite sordid.

The U.S. shamelessly and cruelly exploited the daughters and sons of Africa for four centuries. Notwithstanding the crocodile tears over Nelson Mandela, why is it that the U.S. now has a well-established military presence in 35 African nations under the banner of Africom [the United States Africa Command]?

You guessed it. Africa has stupendous oil and mineral wealth that the U.S. and Europe seek to dominate at the tremendous expense of its people.

Vladimir Lenin, Kwame Nkrumah, Sam Marcy and Sara Flounders have written invaluable observations about the structural designs of imperialism. Their writings are as follows respectively: “Imperialism the Highest Stage of Capitalism”; “Neo-Colonialism — the Highest Stage of Imperialism”; “The Bolsheviks and War”; and “War Without Victory.” “Expanding Empire” loyally links all the above.

The U.S. seeks to convert huge swaths of the world into its own private playpen. We must resist this diabolical intent. Relentlessly. To quote Frantz Fanon from his “Wretched of the Earth” classic, workers in the U.S., particularly, “must out of relative obscurity, discover their mission, fulfill it or betray it.”

“Expanding Empire: The Global War Drive of Big Business and the Forces That Will Stop It,” can be read online at workers.org/cm/empire.html.