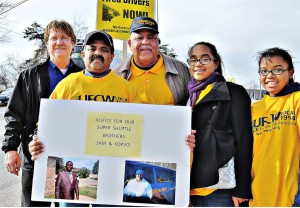 Baltimore — Despite a massive show of airport police, who ejected them from the SuperShuttle holding lot, 35 decorated cars made their way to the Baltimore-Washington International Airport loop on Dec. 21 to conduct a “Caravan for Justice” in support of SuperShuttle drivers.

The action was held in honor of Nelson Mandela and was called by the Baltimore and Maryland “We Deserve Better” Workers Assembly, with the support of Food and Commercial Workers Local 1994. The SuperShuttle drivers have been actively organizing with the UFCW to improve their working conditions. Two have been fired.

SuperShuttle is owned and controlled by Veolia, a multibillion-dollar international corporation that has distinguished itself as a racist, union-busting company, most recently in Boston. It pays its drivers less than the federal minimum wage of $7.25 an hour.

The drivers want to join UFCW Local 1994 to protect their rights as workers. They desperately need this because Veolia has created a company system of indentured servitude that has impoverished these workers, who are mainly immigrants from West Africa.

Veolia makes drivers lease vans — from a company also owned by Veolia — and pay a $35,000 fee, payable in installments over a 10-year period at 15 percent interest. These installment payments are just one of the deductions from the payout to the drivers. They are also charged operating expenses: fees to the airport authority, dispatch fees, insurance fees to a company owned by Veolia and franchise fees. These fees total between $1,200 and $2,100 per week. Most drivers can’t break even under such a system; in some cases, the drivers end up owing SuperShuttle after working long hours.

Veolia has worked out an “evil system,” as one worker described it. The company claims the drivers are not workers but owners, though Veolia owns and controls almost every aspect of their working lives — forcing them to buy insurance owned by Veolia, determining a dress code, carrying out random and unannounced inspections, forced drug testing and much more, including hiring and firing.

Veolia has been able to avoid paying unemployment insurance, payroll taxes, sick leave or any other benefits. The company actually makes more money from the drivers’ fees than from customer fares. Recently, however, the Maryland Department of Labor, Licensing and Regulation has ruled that SuperShuttle drivers are indeed employees, so SuperShuttle must pay unemployment.

This is a system of humiliation and near slavery. Once these drivers have spent long hours of backbreaking work and signed for loans to pay the original fee, they feel too deeply invested to actually leave.

To illustrate the humiliating treatment they receive, SuperShuttle drivers are the only drivers not permitted to use bathrooms inside the terminals and must leave airport property. The hotels are also closed to them. No bathroom or waiting facilities are available for drivers in the holding lots, even though they must stay in their vehicles both winter and summer to maintain their places in line. There is no holding lot at Dulles Airport in Washington itself, but there is one at BWI. The drivers have a trailer there but no bathroom — only a portable toilet.

Many drivers have been terminated for speaking out. As outrageous as it sounds, the company refuses to allow the drivers to sell or transfer their franchises even when they are very sick. This happened to one driver who had his legs amputated due to diabetes and to another who was being treated for multiple myeloma, a form of cancer.

Drivers threatened for speaking at rally

At a rally held before the caravan drove through the airport loop, UFCW Local 1994 representative Amy Millar co-chaired and introduced Tony Kokou Yovo, one of the fired drivers, and Patrick Lacefield, another driver. Millar explained that in all her years as a union organizer, she had never before seen this level of abuse and exploitation.

Yovo explained his case and how he was targeted unjustly by Veolia. He thanked everyone for their support. Lacefield was overcome with emotion as he explained how he was threatened with firing if he participated in the action and how the drivers were “corporate slaves” who need worldwide ­support.

Daniella Longchamp, a youth and low-wage worker from the Workers Assembly, told the drivers that the group supported their struggle. She compared their abuse to human trafficking and the “worst of capitalism” and spoke about the case of the Boston school bus drivers, who are also fighting the ­Veolia corporation.

Sharon Black, a representative of the Workers Assembly and co-chair of the rally, stated, “There is a new low-wage workers movement, from Walmart to McDonald’s. The SuperShuttle workers are part of this. They need and deserve our support.

“Today’s rally and caravan far exceeded our expectations. We thought about 10 cars would show up, given the fact that today’s action is the weekend before Christmas and that we had about a week to organize the caravan. But we thought the issue was so crucial and the need to act as quickly as possible on behalf of the fired drivers called for an immediate response. And today we have an astounding 35 vehicles and about 70 ­participants.”