South Korean President Park Geun-hye had fired over 8,000 striking railway workers and arrested many of their leaders. Some 500 strikebreakers were hired by KORAIL head Choi Yeon-hye in what amounts to an all-out offensive against south Korean workers.

The San Francisco rally, organized by the Transport Workers Solidarity Committee, was timed to support a general strike called by the Korean Confederation of Trade Unions in solidarity with the Korean Railway Workers Union and the federation of public service and transport workers’ unions (KPTU) to which it belongs. KPTU has been opposing the privatization of the national railway.

The south Korean government has also repressed teachers and other public workers for organizing unions by passing laws that make striking workers personally liable in lawsuits. This has resulted in bankruptcy for many workers and even some suicides. 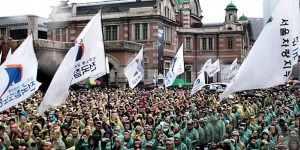 The Korean Railway Workers’ Union rallies in Seoul on Dec. 19.

Workers World spoke with Ike Shin, a Korean activist who immigrated to the U.S. from Seoul in the 1960s. He discussed how he had been involved with the democratization movement for Korea since 1970, when the Yushin Law, “which ushered in ‘emergency’ repression to limit human rights,” was first enacted.

Shin spoke of the plans to build a U.S. base on Jeju Island: “Jeju is a beautiful island, with coastal coral, and shouldn’t be destroyed. As a surfer, I have dreamed of being there. The U.S. government is putting its own people in positions of power in south Korea. Even [south Korean] Embassy representatives say, ‘Why complain to us? Go to the U.S. government.’” 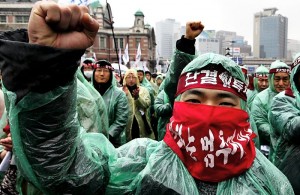 Strike by south Korean railroad workers, above, has sparked solidarity from unions all over, including in San Francisco.

Judy Greenspan delivered a solidarity statement from Workers World Party. “The anti-labor, repressive policies carried out against the railway workers of south Korea are dictated by the U.S. ruling class,” she said. “It is our responsibility to end U.S. support for the south Korean regime and military threats against the Democratic People’s Republic of Korea. Bring the troops home now!”