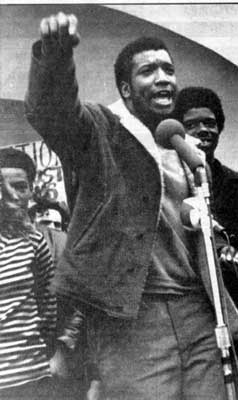 This anniversary memorializes the martyrdom of Chairman Fred Hampton Sr. and Defense Captain Mark Clark at the hands of the Chicago Police Department on Dec. 4, 1969.

The event is a celebration of the life of Chairman Fred Sr., the Illinois state chair of the Black Panther Party and his revolutionary works on the day of his assassination. Each year, Comrade Mother Akua Njeri shares her painful memories of that bloody night when she was eight months pregnant with Chairman Fred Jr.

This year, four times as many people attended as in the past. The crowd of nearly 300 people included many from the West Side Garfield Park and South Side Englewood communities, church organizations, the Nation of Islam and Workers World Party.

L.Y.R.I.C. (Let Your Rhymes Inspire Creativity) Squad brought a whole school bus of youth to the event. The organization is a group of young poets, who also sponsor youth mentoring programs. The organization was founded by Kendria “K-Love” Harris and Teh’Ray “Phenom” Hale. This year, the L.Y.R.I.C. youth acted out a performance based on the Dec. 4 CPD death squad raid that assassinated 21-year-old Chairman Hampton Sr. and 22-year-old Defense Captain Clark. K-Love did a powerful spoken-word piece about revolutionary love and commitment from the perspective of Comrade Mother Akua.

The development that attracted such a large crowd to the IRD this year is that a movie is being filmed about the assassination of Chairman Fred. The first scene was being shot right at Ground Zero, 2337 W. Chairman Fred Hampton Way (aka Monroe Street), where the death squad action took place.

Everyone was told to show up there dressed in late-1960s-style clothing for the filming. The first scene is to be the aftermath of the murder, in which the surviving Panthers gave tours of the apartment that was the site of the massacre to community members and the press.

The tour sought to counter the lies that were spread by then State’s Attorney Ed Hanrahan that the massacre was instead a “deadly shootout” between cops and the Panthers.

Everyone was excited to be involved with such an important film project. Yasiin Bey (aka Mos Def) has been cast as Chairman Fred, and Robin Yvette Allen (aka Lady of Rage) has been cast as Comrade Mother Akua (aka Deborah Johnson). Other cast members include the famous Golden Age MCs Rakim Allah and Malik Yusef. A second scene was shot later that evening at the People’s Church on the South Side.

As is the case with IRD every year, after the memorial at Ground Zero, everyone reconvened at Wallace’s Catfish, a soul food restaurant across the street from The Wall, a beautiful mural of Chairman Fred Sr. by artists in the Rebel Diaz Arts Collective from the Bronx, N.Y.

Much of POCC/BPPC’s activity consists of bringing the revolutionary proletarian politics of the Black Panther Party to a new generation of Black youth. An important part of that work is to avoid any misrepresentation of what the party stood for.

A former political prisoner who spent eight years in prison on a frame-up charge, Chairman Fred Jr. stated: “A lot of times when we commemorate such forces, especially revolutionary forces, there’s an attempt to do it in an abstract type of way and water [the politics] down. We see it in the cases of Malcolm X or Marcus Garvey, or any of the forces of that caliber. Some of the same forces that had a disdain for, or went against, these forces, we see these people as representing them and trying to change what they represented. And so at this stage in the game, truths are being called out.” n