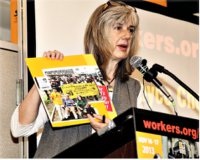 This article is based on a talk given by Chediac in New York City at the 2013 Workers World national conference on Nov. 17.

I am here to announce to you the recent formation of a caucus of people in WWP with disabilities, and to speak as its representative. I am a person with disabilities: I am hearing-impaired and dyslexic.

Civil rights for people with disabilities is a working-class issue. Our class suffers the greatest number of work-related disabilities from difficult and dangerous jobs. Workers also fight and die in imperialist wars they have no interest in and return home without limbs, with brain injuries, with Post Traumatic Stress Disorder.

The waves of federal, state and municipal cutbacks fall heavily on people with disabilities, regarding health care, housing and the right to access. The cuts are eroding measures gained via the Americans with Disabilities Act, won by huge struggles in the 1980s.

‘Disability’ is a political issue

Why a caucus of people with disabilities in a revolutionary party? While society generally sees “disabilities” as a medical or physical question, we see it as a social and political one best expressed by disabled rights activists in the 1970s and 1980s: “Disability is a social condition of discrimination and unmerited stigma, which needlessly harms and restricts the lives of those with disabilities and results in economic disparities, social isolation and oppression.” (“A Disability History of the United States” by Kim E. Nielsen)

What the WWP caucus does

We have formed a caucus because we want to be part of these struggles for full civil rights for all people with disabilities and against the discrimination, stigma, economic disparities, isolation and oppression that currently exist. We also want to strongly support and assert, where needed, the authority and opportunity of people with disabilities to be spokespersons for their own individual condition and disability. The capitalist system obstructs and disregards this voice at every turn.

As part of a party of workers and oppressed people, we also want to explain why the oppression and exploitation of people with disabilities is rooted in the capitalist system. We have explored this and other political questions in two forums marking the passing of the Americans with Disabilities Act.

Our members have given eyewitness reports on how in Cuba, people with disabilities run their own institutions and are supported and encouraged by the government. A caucus member with decades of struggle in the disabled liberation and independent living movement has discussed “Perspectives and Strategies for Disabled Liberation.” A Vietnam veteran has spoken on “Post-Traumatic Stress Disorder.” Another member explained why we need to fight laws scapegoating “The Mentally Ill” for violence in capitalist society.

We have reviewed highlights and lessons of the disabled civil rights movement. We have described how the tool of Marxism contributes to understanding the oppression inflicted upon people with disabilities in class society. We have exposed the warehousing of people with mental and emotional disabilities in the racist prison system. These talks are now available for viewing in a two-DVD set entitled “Disabilities and Class Struggle.”

The caucus also wants to help broaden consciousness in WWP, in the political movement and in our class on the importance of this struggle for civil rights for people with disabilities. We have formulated a disability etiquette sheet to keep ourselves and others up-to-date on sensitivities concerning people with different disabilities. We are planning to translate this into Spanish and other languages. We ask for those who struggle for a livable wage to amend their demands to reflect “a livable wage for all workers, with and without disabilities.”

We strive to make WW meetings and forums accessible and inviting to people with disabilities, who need to know they are wanted in the struggle to build socialism. We are here for consultation on how best to do this, and expect to be listened to respectfully if we initiate such discussions.

Bourgeois society creates a false hierarchy of disabilities, then presumes to judge which people with disabilities are “worthy” of having their needs met, or having enough money to live on, and which are not. At the same time, ruling-class culture stigmatizes and shames all people with disabilities. The WW caucus of people with disabilities, which includes people with very different issues and needs, does not judge one person’s disability as against another. Instead, we strive to be highly respectful of, to learn from, and to build solidarity with each other. Placing solidarity high on our agenda is consistent with our membership in a revolutionary party that seeks to unite a diverse working class.

We use this slogan because we have found that to many people with disabilities this slogan is mass, immediate and speaks viscerally to the need for justice in their here-and-now lives. For those of us with disabilities, the most important thing about us is our abilities. We feel we have a huge amount to contribute and want the means to do so. We fight for our right to have our needs met so that we can make that contribution — to the political movement and to society as a whole.

A unique compilation. Speakers view civil rights for people with disabilities through the prism of Marxism and in the context of class society.  Topics include: psychiatry and capitalism; an eyewitness account of disability rights in socialist Cuba; autism and the class struggle; perspectives and strategies for disabled revolution; veterans with disabilities and post-traumatic stress disorder; and warehousing people with disabilities in a racist prison system.

To order: Send $20 plus $3.50 for shipping first class with your name and address to: