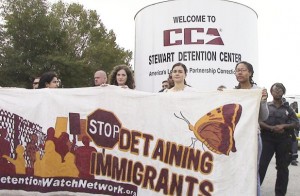 Lumpkin, Ga. — For the seventh year, hundreds of protesters gathered Nov. 22 in Lumpkin, Ga., to march to the Stewart Detention Center, a for-profit prison operated by the Corrections Corporation of America. Named as one of the 10 worst immigration detention facilities in the U.S., it holds close to 2,000 men who are in deportation proceedings. While many are there for a few weeks or months, others have been imprisoned for years, enduring poor food, hostile guards, a lack of medical care, meager recreation, little access to legal representation and rare family visits.

Located in Georgia’s poorest county, Lumpkin is far from any public transportation or accommodations. Columbus, Ga., is the closest city, nearly 40 miles away.

Initiated by the Georgia Detention Watch and held on the Friday of the annual “School of the Americas” protest at Fort Benning, Ga., the yearly rally and two-mile march to the prison grounds makes the connection between the violence of the military trained at the SOA and the economic, political and social conditions in their countries that force so many to immigrate to the U.S.

Each year, the most compelling testimony for the closure of Stewart comes from the family members and former detainees, whose suffering is a source of profit for the prison corporation. Shut Stewart down!