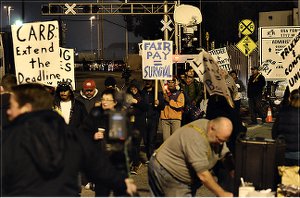 Oakland, Calif. — Truckers held a work stoppage at the Port of Oakland the morning of Nov. 27. About 200 local truckers and their supporters picketed four gates at the SSA Terminal. The truckers haven’t had a pay increase in 10 years.

After several fruitless meetings with Mayor Jean Quan, Port Executive Director Chris Lytle and the California Air Resources Board, the truckers were protesting the lack of progress on their four demands: 1) extension of the Jan. 1 deadline requiring them to buy new trucks to meet higher emissions standards; 2) a “Green Emissions Fee” of $50/load to offset the cost of buying upgraded trucks; 3) a “Congestion Fee” of $50/hour after the first two hours of waiting to pick up loads; and 4) an increase in pay per load. The truckers say the congestion fee is to encourage the terminals to hire more longshore workers or add more equipment in order to reduce their wait time and the associated idling of truck engines.

The truckers picketed two entrances used by International Longshore and Warehouse Union Local 10 and two truck entrances. They expected support from the ILWU workers, who had just passed a resolution at their membership meeting to “reinforce ILWU’s longstanding principle of honoring picket lines whether organized for union contract disputes or social justice issues.” Instead, many of the ILWU workers were in disarray, having received a morning dispatch tape from their leadership telling them to go into work. So they crossed the lines.

The Oakland Police Department stopped the truckers from picketing the driveways, forcing them to the curb. “The police were pushing us off the picket lines even though the judge said it’s illegal. After last time when they hit people with batons, people were afraid, but they kept moving to hold the lines,” said local port trucker Jose Gomez in the Port of Oakland Truckers Association press release issued Nov. 27. The truckers then moved their lines entirely to the two SSA trucking gates, but again the OPD illegally moved the picketers to the side. The truckers, however, diverted their lines across the whole intersection, blocking all road traffic at both truck gates.

The Truckers Association release reported: “At least one person picketing was struck by the vehicle of a terminal employee crossing the picket line, and … there were five arrests. Those arrested were cited and released. One police officer was injured when a car crossing the truckers’ picket line ran over his foot.”

Gomez noted: “Normally, at this time of day the SSA gate has lines of trucks going all the way down the street in both directions, with trucks waiting in the center lanes as well. Today the lines were very short and mostly outside [long-haul] drivers. It’s important because SSA has a lot of ships coming in today, and they are not going to be able to get trucks to take the loads.”

“In my company, there is no one working,” said Jonas, a local driver.

The port was closed Nov. 28 for the holiday, but the truckers returned Nov. 29 and set up a picket at an AMPCO parking facility, where the truckers park their cars and pick up their trucks. About 60 truckers and their supporters picketed the six-lane driveway there for more than two hours, holding up trucks from getting out and cars from getting in. Again the OPD forced the truckers off the driveway, allowing the trucks to get out. But a number of truckers, even though they weren’t on the picket lines, never came in to work. The parking lots were filled with idled trucks and the lines at the SSA Terminal were again short, despite the large amount of cargo waiting to be hauled.

According to the Truckers Association Nov. 27 statement: “Some truckers who crossed picket lines today claimed they faced retaliation from their companies. During the last work stoppage, notoriously bad trucking dispatch company GSC charged their drivers illegal demurrage fees for honoring picket lines. When drivers refused to pay, they found deductions in their paychecks. While some long-distance truckers and employee drivers crossed picket lines, the vast majority of independent contractor truckers picketed or refused to take loads today.”