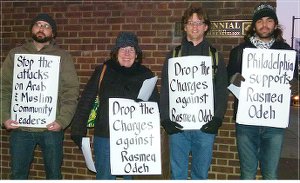 At a Nov. 13 rally called by the Philadelphia Boycott, Divest and Sanctions group and the Philadelphia International Action Center, activists stood in solidarity with Rasmea Odeh to demand all charges against her be dropped.

On Oct. 22, Odeh, a Palestinian-American community activist, was arrested by Department of Homeland Security agents. Her supposed “crime”? U.S. authorities accuse Odeh of lying on her 1994 immigration application by failing to mention an arrest and conviction in an Israeli military court that occurred 45 years ago.

Odeh was arraigned on Nov. 13 and has been released on $15,000 bond. If convicted of lying on her citizenship and visa applications, Odeh faces 10 years in prison and possible deportation.