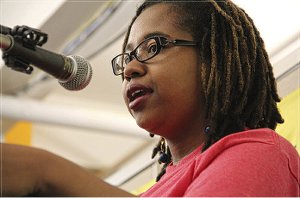 Talk given at WWP conference by Tachae Davis.

Youth today are suffering at the hands of imperialism. As a youth of color struggling to survive in Detroit, I am furious at the conditions in which people are forced to live.

Detroit has always been under constant scrutiny by the media, who will have you believe Detroit just went bankrupt overnight. Detroit’s debt was intentionally created to justify its systematic destruction. Big banks trapped Detroit in toxic swap deals that they knew Detroit could not afford, right before the economic collapse in which banks were given low-interest-rate loans by the Fed to bail themselves out. As a result, austerity measures have been introduced repeatedly to cut funds to health, education and other social programs in a predominantly African-American city.

These cuts spell disaster for workers and oppressed people, especially the youth of the city, who are struggling to find work in a state with a reported 18.8 percent unemployment rate, as of July. Recently, the Detroit Free Press reported a fall in the unemployment rate, now at 7.2 percent, but this does not spell recovery, and in fact does not reflect those who have stopped looking for work or who are underemployed.

It is not uncommon to hear of youth, students and nonstudents alike who work two or three jobs just to make ends meet. Often, these jobs are part-time and un-unionized, forcing youth to work overtime to sustain themselves and pay bills, the most expensive being tuition, which has steadily risen. Student debt has ballooned to $1 trillion in total, as austerity measures also mean more scholarship programs and initiatives have lost funding, which dissuades college and high school students from pursuing a degree.

Even with a degree, many students are still stuck in low-wage jobs that seek to exploit their labor as these corporations expand globally and maximize their profits in record numbers. Many youth are forced to stay with their parents, or move back in, as they can no longer afford a dorm or apartment due to rent increases.

As a student and part-time worker, I struggle to make the commute every day by use of public transit, which has also seen dramatic cuts of routes and workers, including drivers and maintenance workers. These issues recently reached a fever pitch on Oct. 22 when the Amalgamated Transit Union, Local 26, rallied in front of the Coleman A. Young Municipal Center, where they stated multiple grievances, including erratic scheduling, poor bus maintenance and violence.

Both bus drivers and commuters agree that overcrowding and late arrival times have created a hostile relationship that makes conditions dangerous for all. In a city that is already heavily policed by state troops, the answer has been to install surveillance cameras on buses. This is but one of a series of reactionary measures the state has enacted to supposedly create order, while they divert people’s attention away from the underlying fiscal reasons for the crumbling infrastructure and economy. From foreclosures, to a lackluster bus system and school closings, the message is clear: those who are most vulnerable in a capitalist system are valued the least!

There is a solution, one in which the workers are unionized, and are entitled to safe working conditions and fair wages. Education will be a right, which will not chain youth to insurmountable debt that leaves them overstressed and overworked, without the means to access proper health care or even afford basic necessities such as food.

No longer should individuals and families be forced to choose between feeding themselves, paying bills or putting gas in the car. Government entities that only seek to perpetuate war, exploit other countries and their resources must be dismantled!

What is needed now more than ever is a system that truly guarantees the right to life by ensuring people the very basic things that are needed to build and nourish life.

Youth today have no future in this system, and must unite with other young workers and oppressed youth to fight against imperialism and build socialism! n