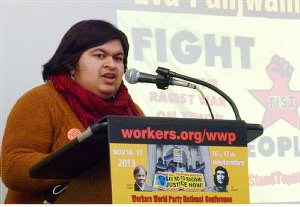 Talk given at WWP conference by Eva Panjwani.

In preparing my remarks today on the revolutionary potential of my generation, especially Black and Brown young people, I want to first ask you all, brothers and ­sisters, 50 years after the March on Washington, are we free?

Living in the age of empire, language loses meaning. When “democracy” means neoliberal capitalism, “­reform” means repression, and the phrase “humanitarian intervention” is merely a part of the public relations campaign for the next imperialist war and occupation, what is freedom, after all?

I vividly remember, in the aftermath of 9/11, the mainstream capitalist media wound up xenophobic sentiment by repeatedly posing the question, “Why do they hate us?” and allowing the reactionary forces to answer, “They hate us because of our freedoms.”

How tragic it felt then, that when fear-mongering was baiting Muslims, Arabs and Third World immigrants, white America was asking the very same question that Black and Brown kinder­garteners ask their parents every year about white America — “Why do they hate us?”

When people of color are pushed out of their neighborhoods and into specific areas of their cities, unconstitutionally stopped and frisked at alarming rates by the NYPD, our plight does not greatly differ from the people of Gaza stopped daily at checkpoints under the Israeli occupation of Palestine. Youth of color are either locked up in the system of mass incarceration that jails us, or locked out of higher education and good jobs, forming a new racial undercaste within the United States. We are a generation under siege.

To my understanding, to be free is to live a life without fear. But a life without fear is a promise we could not yet assure youth of color. For young people — Jonathan Farrell in my home state of North Carolina and Renisha McBride in Detroit, Mich. — the stories are eerily similar. Two Black youth in two different car accidents approached nearby homes for help, for assistance in their moments of vulnerability, and had their lives cut tragically short when their blackness held them seemingly complicit in the white supremacist mentality that they were guilty, dangerous, a threat until proven otherwise.

Jonathan was killed by police officers in a misguided attempt to guard private property, while Renisha was shot in a manner similar to the murder of Trayvon Martin, by a white man who saw her as a threat. For it wasn’t just pain and anger at the acquittal of George Zimmerman that sent my generation to the streets, our pain and anger was coupled by a refusal to accept that somehow 17-year-old, unarmed Trayvon was found fatally guilty by a society that criminalized his very existence.

The desire to live a life without fear is the very hope that capitalism extinguishes for undocumented youth. Countless young people have suffered the extreme mental and emotional consequences of a life lived in the shadows. Policies like Secure Communities terrorize our neighborhoods while we are told that border militarization is the price we must pay when seeking immigration reform. So again, I ask you, brothers and sisters, are we free?

Connecting our future to the past

Young revolutionaries before me, like Huey Newton of the Black Panther Party, asked these very same questions in previous generations. Huey taught us that modern capitalism takes away our sense of community, of togetherness, of shared purpose. It promotes individualism and fear. And when Rev. Martin Luther King Jr. gave his “I Have a Dream” speech 50 years ago, he too reminded the crowd that it had been 100 years since the Emancipation Proclamation had been signed, but the “colored” man was not yet free.

Us rebels and activists are quick to remind folks of the other profound words of Dr. King, on capitalism, on poverty, on war. But when Dr. King spoke his now iconic words — “I have a dream. It is a dream deeply rooted in the American dream” — it sparked something in the imagination of generations to come.

Young people across the nation continue to rally around the promise of a dream. From the DREAM Act and United We Dream, to the undocumented youth known as the Dreamers, to the Dream Defenders occupying the Florida state Capitol for Trayvon’s Law, we are the products of a generation that had a dream. We are the products of a dream deferred. We are the sons and daughters of farm workers and slaves, dedicated to repainting the canvas of history with the paintbrushes given to us by Malcolm, by Huey, by Gloria, by Assata, by Cesar, by Sam Marcy and Dottie Ballan.

FIST Youth are a growing coalition of youth and students committed to replacing jails with schools, ending the war on the undocumented, dismantling the systems that criminalize us, and fighting for self-determination for our communities.

We hear your whispered questions, “Where are the youth?” We know our revolution cannot be retweeted and assure you all, even when you may have begun to lose hope, there is a new generation of organizers, marchers, fighters, activists, lovers and dreamers arriving and we are ready. We are a generation forgotten by trade unions, yet from Bangladesh to Baltimore we’ve taken to the streets to demand a living wage. You may doubt our discipline but just watch as we join hands to take up the torch — we are ready. Wearing butterfly wings and graduation robes we will march against injustice and win the fight for freedom in our lifetime.