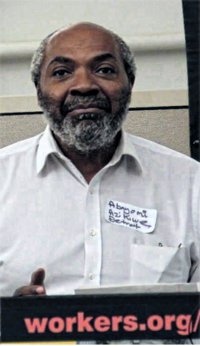 From a WWP Conference talk by Abayomi Azikiwe.

Detroit has been and will continue to be at the forefront of the struggle against the ravages of capitalism in the contemporary period. The situation in Detroit and throughout the state of Michigan illustrates clearly that the so-called economic recovery championed by the Obama administration and the corporate media does not exist.

Our view is that there is no real recovery for the working class and the oppressed under capitalism. The only real solution to the economic crisis is the overthrow of the capitalist system and the construction of socialism.

This position has been articulated by Workers World Party through Sam Marcy in his “High Tech, Low Pay” thesis first advanced during the mid-1980s and continued in the last five years by Fred Goldstein in “Low-Wage Capitalism” and “Capitalism at a Dead End.”

Detroit, which was the heartland of industrial capitalism from the early through later decades of the 20th century, poses profound challenges for the organization and mobilization of the people based on a revolutionary program. How do we organize workers, many of whom are from the oppressed nations, when their jobs, schools, houses and communities are being systematically destroyed through capitalist restructuring?

Where do we begin in this period and what is to be done in light of the fact that the traditional basis for the organization of the proletariat has undergone monumental changes?

We have no other choice except to go where the workers and the oppressed are toiling and living. We must approach our struggle based upon the concrete conditions in existence during this period.

Wherever the workers and oppressed are we must be among them learning from their thinking and actions and engaging the masses with a revolutionary ideology and program that addresses their needs and ­aspirations.

Our approach has been rooted in the most obvious aspects of the capitalist crisis. Through the Michigan Emergency Committee Against War & Injustice (MECAWI), we sought not only to advance and maintain an anti-imperialist stance on United States military interventions in Afghanistan, Iraq, Haiti, Somalia, Libya and Syria, but also to stress that the Pentagon budget, the attacks on the Middle Eastern and Muslim communities represent the continuation of war even within the domestic confines of the U.S.

MECAWI’s slogan of “Money for our cities, not for war!” appealed directly to the instinctive opposition to imperialist war among the oppressed and the working class. This same programmatic approach led us to seriously address the “housing question” when in 2007 tens of thousands of working-class families in metropolitan Detroit were being thrown out of their homes.

The Moratorium NOW! Coalition to Stop Foreclosures, Evictions & Utility Shutoffs took the most logical step by working directly with families to save their homes but to also demand a general halt to foreclosures and evictions.

These efforts won limited victories for individual homeowners and have extended the struggle to encompass both the role of the banks and the government agencies of Fannie Mae and Freddie Mac. Today broader forces in Detroit and across the country are involved in the movement against foreclosures and evictions.

Sections of the United Auto Workers, the Steelworkers, the Service Employees union and numerous community organizations have taken up this fight, freeing us up to address the looming crises of the cities that threaten pensions, health care, municipal services, public education and the right to self-determination among the nationally oppressed.

These developments are a reflection of what the banks and corporations are attempting to carry out in Detroit, and it portends much for the future status of the working class and oppressed across the U.S. and indeed the world. What people need to know around the country and globally is that Detroit did not file for bankruptcy, but this illegal action is being implemented by an imposed, so-called “emergency manager” who, through the Michigan governor, is working on behalf of finance capital to steal every gain won through protracted struggles over the last 80 years.

We have intervened in the Detroit economic crisis as well as the bankruptcy. Our slogan is “Cancel the debt!” The banks claim that Detroit owes $18 billion to $22 billion in obligations to the same financial institutions that stole our jobs, houses, city services and educational system. Our position is we owe the banks nothing; the banks owe us.

As Comrade Fidel Castro advocated over 30 years ago, the international debt crisis was not the creation of the majority of people throughout the world. Consequently, we have no responsibility to pay for a crisis that was not created by us, but by the capitalists and the imperialists.

On Oct. 23 in Detroit, more than 1,000 workers, retirees and community activists surrounded the federal courthouse at the opening of the bankruptcy eligibility trial chanting, “Hands off our pensions [health care, city services, art assets], make the BANKS pay!”

We are certain that this unprecedented fightback will spread across the U.S. There must be a national coalition of the cities to fight the banks and ensure that they pay for damages done to the overwhelming majority of people in the U.S.

Our struggle here in the U.S. must align itself with the workers’ movements in Greece, Portugal, Spain, Belgium, Italy and other states in Europe which are facing the same crisis. The escalating militancy among the South African workers is a reflection of the world capitalist crisis and one in which the South African Communist Party through its Red October Campaign has focused also on the role of the banks.

Our party must enhance and deepen its work among the masses. We must bring a Marxist analysis to the struggles around housing, police terrorism and austerity. As a Leninist party we know that the people must be organized along revolutionary lines in order for victory to be achieved.