Winds of almost 200 miles an hour brought destruction and untold numbers of dead throughout the central Philippines. Hundreds of towns and fishing villages were washed and blown away.

Workers World Party expresses its solidarity with the Philippine people in their efforts to recover from this horrific disaster. At the same time, we must be wary of relief aid set up by imperialist organizations and be mindful that the typhoon and its aftermath have become a pretext for U.S. military occupation of several Philippine islands.

We publish here the statement of Prof. Jose Maria Sison, chairperson of the International League of Peoples Struggle: 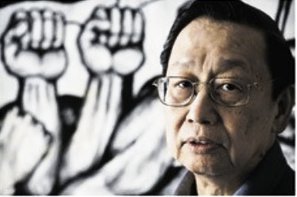 We, the International League of Peoples’ Struggle, appeal to all our global region committees, national chapters, member-organizations, our friends and all the people of the world to carry out a campaign of raising resources and delivering them to the millions of people afflicted by super typhoon Yolanda (Haiyan) in 35 provinces in the central part of the Philippines.

The aid is for immediate relief and rescue and long-term rehabilitation of the devastated communities and families, especially of the impoverished workers, peasants, fishermen and the middle social strata who have suffered death and injury and whose homes, personal belongings and livelihoods have been either blown away by the overly strong winds or swept away by storm surges from the sea.

Due to the destruction of energy and communication lines, the full extent of the destruction of lives and property is still being assessed. But there are already images of the wide scale of destruction taken from airplanes and satellites. Entire communities are flattened. Thousands of lives have been lost. Millions of people are in need of food, clean water, clothing, shelter, medical services and proper burial of the dead.

The most reliable private relief-and-rehabilitation organization in the Philippines is BALSA, which includes BAYAN and other ILPS member-organizations as well as civic and religious organizations that have an excellent record of undertaking humanitarian efforts in previous disasters. Within the Philippines, BALSA is taking initiative in assessing the destruction to life, property and livelihood and in collecting and delivering the aid to the victims. The ILPS advise Filipino organizations and their friends abroad to forward to BALSA the aid that they can collect.

It is necessary for the people’s organizations to raise the money and goods for the immediate relief and rescue and for long-term rehabilitation of the communities and families, especially because the so-called calamity funds of the Benigno Aquino government have been misused and continue to be misused as pork barrel for purposes of corruption and political patronage from the level of the chief bureaucrat Aquino downwards.

Both civil bureaucracy and military forces of the Aquino regime did not give timely and adequate warning to the people about the grave dangers of the overly strong winds of the super typhoon and the storm surges from the sea. They did not prepare evacuation centers. And they did not guide the people to move to relatively safer areas before the super typhoon struck.

We appreciate highly the efforts of the Communist Party of the Philippines, the New People’s Army and the National Democratic Front of the Philippines to mobilize the local revolutionary organs of political power, the mass organizations and the broad masses of the people to prepare themselves against the onslaught of the super typhoon and for collective action in undertaking rescue, relief and rehabilitation operations.

We also admire the revolutionary forces for unilaterally declaring ceasefire in all the areas devastated by the super typhoon. They stand on a high moral ground as they serve the people in need. In sharp contrast, the bureaucrats and military officers of the reactionary armed forces loot a big part of the relief goods from government warehouses and use another part for counterrevolutionary propaganda and psywar. They shamelessly coordinate with U.S. planes and ships in interventions under the pretext of humanitarian aid.

For the International Coordinating Committee

of the International League of Peoples’ Struggle

For people in the United States who would like to send aid, Berna Ellorin of the popular organization, BAYAN USA, recommends sending contributions to NAFCON, an organization that will ensure that contributions reach those in need. Go to nafconusa.org and click the Donate button.