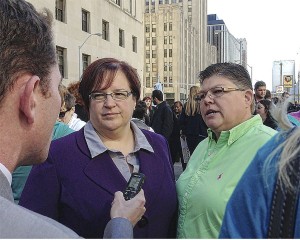 Jayne Rowse and April DeBoer never expected to be viewed as celebrities or heroes. Yet the two Michigan nurses, who are in a 14-year committed relationship and are raising special-needs children together, said at an Oct. 16 rally that they “are proud to be the ones representing the gay and lesbian community in this fight” for the right to marry. What began as a lawsuit to overturn state laws barring them from jointly adopting their three children has become a pivotal case that could overturn the ban on same-sex marriage in Michigan.

The 4-year-old and two 3-year-olds know Rowse and DeBoer as “Mama” and “Mommy” and relate to one another as brothers and sisters. Yet because Michigan law only permits second-parent adoption for married couples, and because the two are forbidden to marry under a 2004 voter-approved constitutional amendment, Rowse is the sole legal parent of two children and DeBoer the sole legal parent of the third. Prior to the adoption they were foster parents together to all three.

Now, they are legally strangers to children they are raising. Thus, if something were to happen to either of them, one parent would not have custody rights to the child or children legally adopted by the other.

“Our kids are the most important things to us and always will be the most important thing to us,” Rowse explained on Oct. 16, the day of a court hearing expected to decide their case. She and DeBoer sued last year for the right to second-parent adoption because they could not accept that their children were denied rights afforded to other children. It was not the couple, but Federal Judge Bernard Friedman, who decided to link the right to second-parent adoption to the question of the constitutionality of Michigan’s ban on same-sex marriage.

Michigan’s anti-marriage amendment is one of the strictest in the country, barring even the “appearance” of marriage. That language was used to deny health benefits to the same-sex partners of state workers. Michigan, therefore, was not the state that the marriage equality movement would have imagined as the next state to make marriage legal for all.

Last year, Judge Friedman refused to make a ruling on either the adoption or the marriage rights issue, choosing to wait for the U.S. Supreme Court to decide on the federal “Defense of Marriage Act” and California’s marriage ban. In July, the high court struck down DOMA and the California ban but left other state bans intact.

Rowse, DeBoer and more than 100 supporters rallied Oct. 16 and then filled Judge Friedman’s courtroom. They expected a ruling that day or at most within a few weeks. Couples around the state were lining up to get married the moment a positive ruling was issued. The statewide civil rights organization Equality Michigan identified county clerks who were willing to issue licenses. Many couples wanted to marry as soon as possible, anticipating that the judge would issue a stay if the state appealed a pro-marriage ruling.

The state could not have advanced a more backward argument than that contained in the brief submitted by Michigan Attorney General Bill Schuette, who was elected in 2010 with Tea Party backing. “Responsible procreation and childrearing are well-recognized as legitimate State interests served by marriage,” Schuette argued. “One of the paramount purposes of marriage in Michigan … is, and always has been, to regulate sexual relationships between men and women so that the unique procreative capacity of such relationships benefits rather than harms society.” The plaintiffs, Schuette claimed, “wholly miss this fundamental point.” (Huffington Post, Sept. 18, 2013)

Even today, what Karl Marx and Frederick Engels called “the status of women as mere instruments of production” in the “Communist Manifesto” still exists — to the degree that an elected official can claim “state interests” in upholding it!

Attorneys for the state repeated the same bogus arguments in court. Plaintiffs’ attorney Carole Stanyar pointed to the consensus position of the American Psychiatric, American Psychological, American Medical and American Social Work associations that child development is not impacted negatively when they are raised by two parents of the same gender.

The judge’s decision on Oct. 16 came as a surprise; he decided not to issue a ruling at all, but to hold a bench trial on Feb. 25. He said he was “in the middle” and would have to hear “expert” witnesses from both sides.

The ruling was a disappointment, but the couple remains confident and determined to keep fighting until victory.

The lesbian, gay, bisexual, transgender and queer movement also expects to defeat a right-wing ballot initiative to overturn a nondiscrimination ordinance in the Detroit suburb of Royal Oak. “One Royal Oak,” the movement in support of the ordinance, has the support of numerous community and faith organizations; the Detroit Metro AFL-CIO has committed volunteers.

Beyond the immediate fights in the courts and at the polls, plans are underway for grassroots campaigns to win statewide anti-discrimination protection for LGBTQ people and to nullify the 2004 anti-marriage amendment.