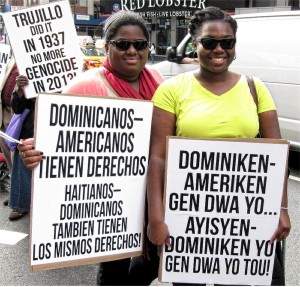 New York — Imagine waking up to the news that the only country you have ever known has officially rejected you by a 9 to 2 vote.

That is what will potentially happen to hundreds of thousands in the Dominican Republic in the coming year.

The status of Dominicans of Haitian descent (born in the Dominican Republic) has mainly been one of marginalized, second-class citizenship. But on Sept. 23, the country’s Constitutional Court decided, with passage of the TC/0168.13 decision, that even that humiliating classification was not enough. The court ruled that “the children of undocumented migrants, who have been in the Dominican Republic and registered as Dominicans as far back as 1929, cannot have Dominican nationality as their parents are considered to be ‘in transit.’”

For more than eight decades, Dominican-born children, grandchildren and great-grandchildren of Haitian migrants were registered as citizens under “birthright by soil,” or “jus soli.” In the last decade several efforts by racist nationalists in the Dominican Republic have attempted to deny citizenship to Dominican-Haitians. That culminated in changing the Constitution in 2010 to discontinue the practice of “jus soli.” Now the Constitutional Court ruled to retroactively denationalize an estimated half million Dominican-Haitians.

Activists and civil/religious groups in the Dominican Republic, along with many abroad, are denouncing this move as civil genocide by the racist nationalists in the Dominican government. A public statement issued by the Haitian Students Association states that “the ruling violates several principles, including the following: the due process of law to strip nationality rights from thousands of people without credible cause, the principle of lenity to the person, the non-retroactive nature of law, the binding character of decisions made by the Inter-American Court of Human Rights, and the rights of the child to identity and nationality.” (Oct. 14)

Despite the oppression Dominican-Haitians face in the Dominican Republic, it is home. Many have no ties to Haiti and do not speak Kreyol, or Creole. The tremendous contributions Dominicans of Haitian descent have made to the country with their labor, cuisine, arts/culture and more must also be highlighted.

Migration from Haiti to the Dominican Republic was facilitated by the interests of Dominican capitalists, especially the sugar barons on the island and their need for cheap labor. Dominican-Haitians have been constant scapegoats by the wealthy ruling elite when gearing up for elections or when deflecting from their role in maintaining the Dominican Republic as a neocolonial state and in championing imperialism.

With the repression faced by immigrants all over the world, including the U.S., many are realizing the gravity of the TC/0168.13 ruling. Nearly 400,000 immigrants were deported from the U.S. in 2011 under the Obama administration. Coalitions are forming within the Dominican-American and Haitian-American communities to denounce this sentence and have the law repealed.

In New York City, within the large Dominican and Haitian communities, the response to this ruling has been outspoken. A Oct. 17 demonstration, conducted in Creole, Spanish and English, denounced the ruling as a violation of human rights. Angel Vicioso from the Dominican community said it was an attempt by “imperialism to divide two poor countries that shared the same island.” He later said his citizenship could be challenged because he doesn’t have birth certificates of his grandparents.

Weekly protests, on Thursdays, are planned near the Dominican Consulate in Times Square in New York. Also a forum hosted by the Service Employees union 1199 is planned on Nov. 15. It is being organized by the New York Coalition Against TC/0168.13.

G. Dunkel contributed to this report.