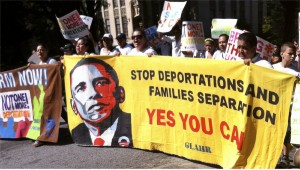 Thousands of immigrants and their allies rallied in front of the Georgia state Capitol on Oct. 5 to take part in the National Day of Action for Dignity and Respect. Organized by the Georgia Latino Alliance for Human Rights, the enthusiastic crowd marched through the downtown streets, passing Immigration and Customs Enforcement offices with colorful banners and signs held high and chanting demands for no more ­deportations.

Refusing to allow congressional inaction on comprehensive immigration reform to delay an end to mass detention and ­deportations, the demonstrators called upon President Barack Obama to take executive action to end the breakup of families.

From undocumented students who are challenging Georgia’s requirement that they pay out-of-state tuition; to the president of the state AFL-CIO; to elected officials and a broad range of faith leaders; to lesbian, gay, bisexual, transgender, queer and women activists; the rally speakers presented the face of a growing movement that loudly declares, “¡Sí, se puede!”