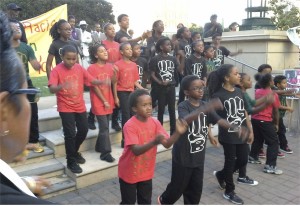 Events were held around the country on Aug. 28, the date of the racist murder of Emmett Till in 1955 and the 50th anniversary of Dr. Martin Luther King Jr.’s March on Washington for Jobs and Freedom.

Organized by the Peoples Power Assembly movement as “Justice for Trayvon Martin Assemblies,” they demanded an end to the war against youth of color, connected that domestic war to the impending threat of a new U.S. war against Syria, and provided a step forward in uniting different sections of the working class to build a movement fighting for the interests of the people.

Black youth participated strongly in the event, including wonderful entertainment from City of Oakland Youth Poet Laureate Obasi Davis, Youth Together and Young Oakland. The youth then led a spirited march all the way to Lil’ Bobby Hutton Park in West Oakland. The lead banner called for “Justice for Trayvon.” 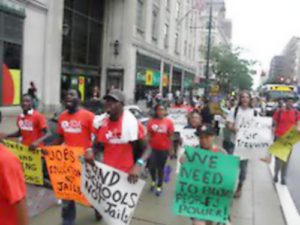 Despite consistent rain, around 60 young people, students and community members marched through the Center City neighborhood of Philadelphia. Ewuare Osyande, author of “Stand Our Ground: Poems for Trayvon Martin and Marissa Alexander,” opened the march with his own poetry, then engaged the crowd with a fiery speech. Shakur Miller, a student with Youth United for Change, spoke courageously on the struggle of young people of color in Philadelphia, saying, “I hate when the melanin in my skin is mistaken for ignorance and criminality.” Pam Africa, in her typical fiery brilliance, spoke on the need for young people to stay strong to defeat the system that undervalues the lives of young people of color.

The march was the first action organized by the Philadelphia Peoples Power Assembly. Darasia Selby-Adebisi, an Assembly organizer and member of Malcolm X Grassroots Movement, said, “I was really impressed by the youth that came; not only just their numbers, but their energy and their level of awareness of issues that impact their lives was amazing.

The march ended at a busy Center City shopping mall, where speakers denounced the impending U.S. war on Syria. Students spoke on the impact of 24 school closings and the layoffs of 3,500 school staff, demanding the right for young people to an education.

In Providence, R.I., the largest march with an African-American majority in decades was held Aug. 28. Marchers gathered on Dr. Martin Luther King Bridge, in the shadow of the Rhode Island Statehouse. Before stepping off they listened to the words of Wayne Woods, Defend ‘The Dream’ organizer, as he rededicated the bridge to Dr. King and his struggle to end racism, poverty and war.

From the back of a sound truck, Woods led marchers in chants, interspersed with deejay Eric Palmer’s magical mix of King’s “I Have A Dream” speech and singer Curtis Mayfield’s “Keep On Pushin.” A giant orange banner saying “Justice for Trayvon! End Racism! Fin al Racismo!” took up the whole street.

The march swelled to 200 as it looped through Kennedy Plaza downtown, where hundreds were waiting for buses. Members of Unite HERE Local 217, who are fighting for a union contract, joined the march at the Renaissance Hotel.

Theresa Price of the RI Peoples Assembly gave a history of the 1963 march. Then she and other speakers took turns condemning the failure of the U.S. government and society to fulfill “the dream,” and explained the capitalist system’s need to maintain racism, poverty and war as tools to divide and conquer the labor, land and resources of the peoples of this country and the world.

In New York City, a march targeting several police precincts wound its way from Harlem to the Bronx. A multinational, multigenerational group of several hundred people demanded an end to the New York Police Department’s vicious “stop-and-frisk” policy, and along the route called out the names of Black youth slain by the NYPD: Ramarley Graham, Kimani Grey and many more.

Peoples Power Assemblies were held in both Harlem and at the closing rally in the Bronx, where community members told about their experiences with the police, about the need to fight back against austerity measures like the closing of hospitals and schools, and about U.S. imperialism’s latest deadly threats against Syria.

The featured speaker of the day was Boston City Councilor Chuck Turner. It was Turner’s first public appearance since his nearly 3-year-long unjust incarceration in federal prison as a result of an ugly, racist, politically motivated frame-up. Turner condemned the capitalist system and called for a new fight for economic justice involving African Americans, Latinos/as, Asians and working class whites.

Community members in Rockford, Ill., held a “March for Jobs and Justice” on Aug. 28. Roughly 30 people in this impoverished city marched downtown rallying at multiple “Justice” system locations. They were joined by more people when they reached police headquarters, located across from the main bus terminal. The march continued to its final destination, Rockford’s new Federal Courthouse.

Speakers there commemorated the historical significance of marching on Aug. 28. Issues raised included the funding of poor and oppressed communities, how structural racism has denied people of color the means of subsistence, the threat of a U.S. war on Syria, and the need for a united fight back against attacks on all poor and working people.