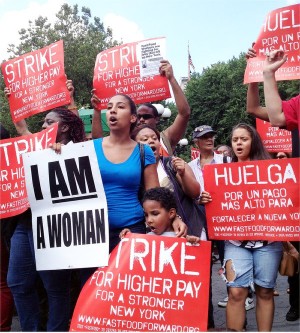 The date of Aug. 26 was named Women’s Equality Day in 1971 because that’s the day in 1920 when women, after years of intense struggle, finally won the right to vote with the passage of the 19th Amendment to the Constitution.

That date is deeply ironic this year, given the recent Supreme Court ruling striking down key provisions of the 1965 Voting Rights Act.

Already Texas and North Carolina have enacted severe restrictions on voting. Similar laws have already been passed in other states, so the ruling gives a green light for more. The ruling allows states to create obstacles that in effect deny voting rights to people of color, the elderly, youth and rural people the most — and to thousands of women in the process. It is a ruling that violates the 19th Amendment.

So it’s hypocritical to commemorate Women’s Equality Day when state and federal governments do not promote women’s equality.

Take the dirty deeds Texas Gov. Rick Perry has recently dealt women. Not only did Perry sign the Texas voting bill, but he vetoed a state bill mandating equal pay for women. (State bills, passed by 42 states, make it much less costly for women to bring discrimination suits in state court rather than in federal court.)

The Houston Chronicle revealed in early August that Perry had vetoed the bill after being lobbied by the Texas Retailers Association at the behest of million-dollar Macy’s and Kroger Food stores. For that veto, Perry earns the title of “capitalist stooge.”

For signing one of the most stringent anti-abortion laws in the nation, Perry wins the title of “most misogynist U.S. governor.” The law will force 90 percent of abortion clinics in Texas — all but five out of 42 — to close because they do not meet totally irrelevant physical requirements as ambulatory health centers.

That means thousands of poor women, mostly those affected by the voting law, will also be denied many additional life-saving health care services provided at women’s clinics. What adds luster to Perry’s misogynist crown is that he has also refused to expand Medicaid coverage to people in Texas as mandated by Obamacare, denying thousands of needy women no-cost health care coverage.

State governors in Wisconsin, North Carolina, Ohio and Colorado are runners up in the misogynist category, since they also signed laws limiting women’s right to legal abortion. According to a Guttmacher report released July 8, states adopted 43 restrictions on access to abortion in the first half of 2013 — as many as enacted in all of 2012.

On June 18, the House of Representatives passed a bill (228-196) that would restrict abortions after 22 weeks on the unscientific supposition that a fetus feels pain at that point in its development. Since it is a direct challenge to the 1973 Supreme Court decision legalizing abortion, the bill will never be passed by the Senate. The impetus for it, as noted by many sources, was to “energize” the Republicans’ Tea Party base — as if limiting women’s rights was an invigorating, kick-ass sport.

The fact that Sen. Wendy Davis conducted an 11-hour filibuster to try to stop the anti-abortion bill inspired a pro-choice upsurge lasting days at the Texas Capitol. Thousands of women, many wearing orange shirts, converged on Austin, with 1,200 signing up to testify at hearings against the bill on July 2. Meanwhile, 5,000 pro-choice protesters demonstrated outside. Their activism inspired women in states like Wisconsin and North Carolina to likewise defend their right to legal abortion.

One of the most far-reaching signs of an upsurge of women fighting for equality is their participation in the movement to end poverty-level wages in the fast-food industry. Strikes at places like McDonald’s, Burger King and Wendy’s have mushroomed from seven cities a month ago to about 60 cities on Aug. 29. And it’s women, often single mothers, who are leading chants like “We can’t survive on $7.25!” Women are also demanding living wages and benefits at Walmart.

Taking note of that and of the fact that women are now 49 percent of the workforce, with an increasing number being their families’ primary breadwinners, the AFL-CIO, in preparation for its Los Angeles convention Sept. 8-12, held several sessions for women workers to discuss their most pressing issues. The list included things like good paying jobs for all; equal pay for equal work; paid family leave; and quality, free education, child care and health care with the full range of reproductive justice issues, including no discrimination against lesbians, transwomen and women with disabilities. These are topics the women’s movement has demanded action on over the past 40 years.

What’s significant is that the organized labor movement appears, at long last, to be seriously listening to women. But it will take a long, hard, united fight to destroy capitalism, an economic system based on oppression and exploitation, before U.S. women can truly celebrate equality.