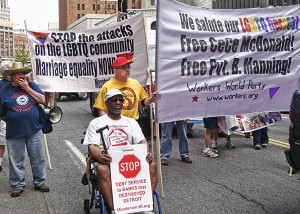 This year’s Pride march in downtown Detroit on June 9 raised a timely slogan: “Marching toward equality.” Most lesbian, gay, bisexual, transgender and queer people in Michigan have no legal protection from discrimination — they can be fired, evicted or denied access to public accommodations such as restaurants, hotels or health clubs. Only 24 Michigan cities have protective ordinances. The most recently passed ordinance, in the Detroit suburb of Royal Oak, could be overturned by a right-wing ballot initiative. An anti-marriage amendment to the state Constitution is one of the country’s most restrictive.

The status quo is not going unchallenged. Activists are organizing to defend the Royal Oak ordinance, overturn the marriage ban and pressure the Legislature to amend the state’s civil rights law to ban discrimination based on sexual orientation, gender identity or gender expression. The June 9 Pride march was an expression of those aspirations.

Many significant allies marched in support of the LGBTQ community. Detroit Metro AFL-CIO, UNITE HERE Local 24 and members of the American Federation of Teachers had contingents. The union UNITE HERE was able to talk about its campaigns against the anti-worker Hyatt Hotels chain and the Hotel Pontchartrain in Detroit. A number of progressive faith organizations were also part of the march.

The Michigan Emergency Committee Against War and Injustice; the Moratorium Now! Coalition to Stop Foreclosures, Evictions and Utility Shutoffs; and Workers World Party marched together to support LGBTQ civil rights, marriage equality and the freedom of CeCe McDonald and Pfc. B. Manning. While staffing a table, this writer found that many of the thousands attending the parade and festival held anti-capitalist sentiments and were open to socialist ideas. This was especially true of LGBTQ and LGBTQ-allied youth.