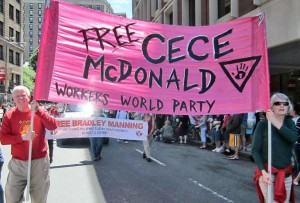 Jason Collins was featured in a lead contingent in the Pride march. This African-American National Basketball Association player came out last month, making him the first openly gay player in a professional team sport.

Most significant was the presence of the Smedley Butler Brigade of Veterans for Peace and several Pfc. Manning contingents, which were encouraged by the Boston Pride Committee to march with the LGBTQ community for the first time. Three months ago, VFP invited the LGBTQ community to march with them in South Boston in the St. Patrick’s Day Parade, which both communities have been banned from for years by the pro-war Allied Veterans of South Boston. VFP’s actions led to an alternative Peace Parade on the same day as the Allied Veterans parade. 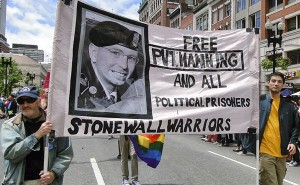 The growing unity and coalition between the anti-war movement and the LGBTQ community is becoming a leading edge of struggle against the Pentagon war machine, reminiscent of the work of the historic Gay Liberation Front in the late 1960s and early 1970s. During that period the GLF — which developed directly out of the Stonewall Rebellion of June 1969 — supported Ho Chi Minh and the National Liberation Front of Vietnam. The NLF was eventually victorious over U.S. President Lyndon B. Johnson, Gen. William Westmoreland and a U.S. invading army of 500,000.

The GLF in New York City and Washington, D.C., in particular, demonstrated with the Black Panther Party 21 and played a major role in the 1970 Panther Revolutionary Constitutional Convention. To read about this history, see Leslie Feinberg’s “Lavender and Red” series at workers.org.