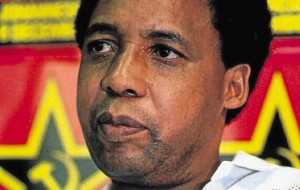 On April 10, 1993, racists in South Africa killed Chris Hani, the general secretary of the South African Communist Party and commander of Um Khonto we Sizwe (MK — “Spear of the Nation”), the military wing of the African National Congress. Hani went out for a morning run and was heading back home when Polish immigrant Janusz Walus approached him, saying he wanted to ask the leader a question. Soon Hani was shot dead, right outside his front door.

The people of South Africa were shocked and outraged at this attempt to derail the negotiation process between the ANC and the ruling Nationalist Party, then headed by President F.W. de Klerk.

It was later revealed that Clive Derby-Lewis, a Conservative Party member of parliament under the apartheid government, had provided the weapon to the assassin. The goal of the assassination was to ignite a race war and consequently prevent a national nonracial election that would allow the the ANC to come to power. But they did, one year later.

Both Walus and Derby-Lewis were arrested and prosecuted by the Nationalist Party government. They were given the death sentence, which was later commuted to life in prison after the ANC-dominated government in 1995 adopted a new constitution that outlawed the death penalty.

On the 20th anniversary of Hani’s assassination this year, a commemorative program was held at the Thomas Titus Nkobi Memorial Park in Elspark, east of Johannesburg, where he is buried. His widow, Limpho Hani, was present along with South African president and ANC leader Jacob Zuma, current SACP General Secretary Blade Nzimande and Zwelinzima Vavi, the general secretary of the Congress of South African Trade Unions (COSATU).

Life and times of a freedom fighter

In a short autobiography written in 1991 after he returned to South Africa to pursue the transitional process, Hani noted: “I was born in a small rural town in the Transkei called Cofimvaba. … I am the fifth child in a family of six. Only three of us are still surviving, the other three died in their infancy. My mother is completely illiterate and my father semiliterate. My father was a migrant worker in the mines in the Transvaal, but he subsequently became an unskilled worker in the building industry.” (sacp.org.za)

Hani’s working-class roots under the settler-colonial system of apartheid provided him with a political framework for becoming active in the struggle for national liberation and socialism. He remarked that “life was quite harsh for us and we went through some hard times as our mother had to supplement the family budget through subsistence farming; had to bring us up with very little assistance from my father who was always away working for the white capitalists.”

At the age of 15, Hani joined the ANC, and during his college years at Fort Hare, he was recruited by Govan Mbeki into the SACP. In 1962, he became a combatant in MK, leaving the country for military training. Hani joined the Luthuli Detachment, a joint ANC and Zimbabwe African People’s Union unit that waged a military campaign in what was then called Rhodesia in 1967. He was able to escape after the operation failed at the Wankie Game Reserve in Rhodesia. In 1968 he relocated to Botswana, and later to Zambia. By 1974, he was working to establish guerrilla bases in Lesotho, where he remained until 1982.

Hani revealed that while he was in Lesotho they “were actually building a number of units from Lesotho into South Africa. … We built a network of structures inside the country. We trained people in guerrilla affairs, in politics, in intelligence and everything else. … Those were exciting days for me because I was receiving these cadres coming from the Transvaal, from the Orange Free State, from the Cape and Natal.” (“Hani: A Life Too Short,” Smith and Beauregard)

He stated, “I was in touch with trade unions. … We began to build education groups inside Lesotho. We prepared them in terms of understanding the ANC and our struggle. We would select the best to send back into the country underground. … All the theory that we had acquired in our training and our limited experience we began to apply creatively in a new situation. And for me that was a turning point in terms of our struggle.”

The mass struggle re-emerged inside South Africa on June 16, 1976, when thousands of students struck in protest against the racist Bantu educational system. The people inside the country never looked back. The struggle soon spread to the working-class centers of production in mining and heavy industry.

Many of the young people who fled South Africa joined the ranks of the ANC and the SACP. By 1983, the United Democratic Front had been formed and two years later COSATU was founded, with hundreds of thousands of trade unionists organized in alliance with the ANC and the SACP.

In his address at the Hani memorial, SACP General Secretary Nzimande castigated the corporate media for their hypocrisy in honoring the life of this fallen leader. Nzimande said, “Some in the media, and a few in our ranks, are playing an old reactionary, and often anti-communist, card of ‘praising’ the dead in order to condemn the living. For instance, some of the media that is praising Cde. Chris today had condemned him as a very dangerous ‘hawk’ whilst he was alive. … Now that he is no more, he is being ‘praised’ by the same media … in order to attack the current leadership of our movement. We must expose this hypocrisy.” (sacp.org.za)

Former COSATU General Secretary Jay Naidoo wrote in the Daily Maverick: “Twenty years on and it is sometimes convenient, or simply too easy, to forget the abyss of civil war from which our leaders drew us back and to speculate on what might have been had the ANC taken a harder line in the negotiation process that led to South Africa’s first democratic elections of 1994. We sometimes need reminding that the liberation movement achieved a ‘political miracle.’ And we need to remind ourselves of the values held dear by Chris Hani, who represented the best of our patriots in wanting a meaningful democratic outcome for our people.” (April 10)

Mbulelo Musi, the director of communications in the department of military veterans, stressed Hani’s “dedication and commitment to the struggle for freedom, ­equality, justice, peace and democracy; his vision; his bold leadership and his compassion for the poorest and most vulnerable working masses of our country inspired many young people to defy death so that the people of South Africa could be free.” (Mail & Guardian, April 12)

Musi stressed: “Had he been alive today, he would have reminded us that we are free because of the immense sacrifices made by the people of the African continent. … As the nation reflects on the life and times of Chris Hani, the best way to honor him would be to emulate his commitment to freedom and democracy, his devotion, patriotism and love for South Africa, as well as his commitment to building a better country, a better Africa and a better world.”