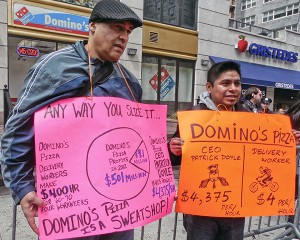 At least 70 people, mostly Asian and Latino/a, protested at one of Domino’s Pizza’s 10,000 stores, this one in Manhattan. At this location, the Justice Will Be Served! campaign defends workers who are forced to work at this sweatshop, which only pays $4 an hour, with no overtime or other benefits, and forces its employees to work 60 to 70 hours a week. Workers who complain get fired. Meanwhile, the Domino’s company made $501 million in gross profit in 2012, and gave CEO Patrick Doyle $9.1 million last year alone.

JWBS! says, “Enough!” It asks supporters to “join us in the fight against Domino’s sweatshop empire. If we take down Domino’s, the rest will fall.” Visit www.facebook.com/boycottdominos and www.knockdowndominos.com.

More than 20 people protested as a CEO of the Darden chain of restaurants spoke at a midtown Manhattan hotel luncheon on April 9. The rally was one of a string of demonstrations called by the Restaurant Opportunities Center, with strong support from youth of color with the Retail Action Project. Darden restaurants have a long history of discrimination against immigrant workers.

Chants included, “Hey, hey! Ho, ho! Exploitation’s got to go!” and “Down, down with exploitation! Up, up with the workers’ nation!” A ROC organizer called Darden — the largest U.S. restaurant chain and owners of Olive Garden, Red Lobster and other chains — the “Walmart of the restaurant industry.” ROC has also organized support for the restaurant workers of Darden’s Capital Grille restaurants in the metropolitan area, who have faced racist bosses and the theft of wages, especially from the pockets of its immigrant workers.

The picket, which received lots of support from honking traffic nearby, ended with the chant, “We’ll be back and we’ll be stronger! We won’t take it any longer!”

A midtown Manhattan, N.Y., protest at a Wendy’s fast food restaurant was called by the Coalition of Immokalee Workers on April 14 to protest the poverty wages and daily violations of the basic rights of Florida farmworkers. While five of the largest food corporations in the U.S. have signed a Fair Food Agreement, organizers say, Wendy’s must now do its part and join as well.

Demonstrators wore red pigtails in imitation of the Wendy’s logo. The very spirited, multinational protesters chanted, “Your burgers may be square, but your food isn’t fair!” and “¿Qué queremos? ¡Justicia!” (What do we want? Justice!)