New York — The neighborhood of East Flatbush in Brooklyn has been rocked since the brutal slaying of 16-year-old African-American Kimani Gray by the police on the night of March 9. The details are still coming out, with the plainclothes cops who shot Gray and eyewitnesses offering differing accounts on whether the youth was armed or pleading for mercy.

But even the New York Police Department admits that the cops shot Gray 11 times. The autopsy report released March 13 said the teenager was hit seven times, including by three bullets which entered his body while his back was turned away from the officers. (nytimes.com, March 13) 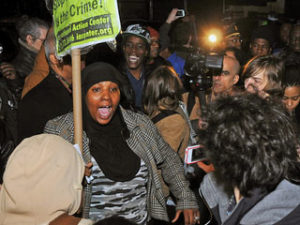 This latest police killing comes at a time when the NYPD has been mercilessly pursuing its infamous “stop-and-frisk” policy. According to the New York Civil Liberties Union, in 2012, 87 percent of cop stops were of Black or Latino/a people and 9 out of 10 were innocent of any infractions. In the first six months of 2012 alone, cops, security guards and vigilantes killed 110 Black people in the United States, according to the Malcolm X Grassroots Movement.

The capitalist media were prepared to treat Gray as yet another statistic until a vigil on Monday night, March 11, took an especially militant turn. Rebellious protesters and community members liberated goods from businesses along Church Avenue and engaged in other extralegal tactics.

Until announced otherwise, there will be nightly demonstrations at East 52nd Street and Church Avenue in Brooklyn at 7 p.m. More details can be found on Facebook at the “We want Justice for Kimani Gray” event.