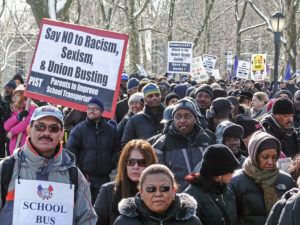 New York — When thousands of school bus drivers, matrons and mechanics marched across the Brooklyn Bridge on Feb. 10, the brutal nature of New York Mayor Michael Bloomberg’s attacks on their jobs became even clearer.

Before that day, public opinion was already moving toward the strikers in Amalgamated Transit Union Local 1181. While the media had clamped down on anything resembling pro-union coverage for the majority of the strike, this began to change as the strike entered its fourth week.

On Feb. 8, City Councilor Robert Jackson held a hearing in which City Council members grilled Education Chancellor Dennis Walcott. While Walcott refused to answer questions, the hearing also featured testimony from parents, union members and union officials. Media coverage was sympathetic to the demand that Bloomberg come to the table to negotiate.

The city’s line that it was merely trying to cut costs started to unravel. What emerged instead was a stark plan that threatens schoolchildren’s safety, takes away drivers’ job security and throws families with special-needs children into chaos.

The powerful rally on Feb. 10 — in which more than 5,000 school bus drivers, matrons and mechanics and their supporters marched across the Brooklyn Bridge to City Hall — dramatized this battle in favor of the union. 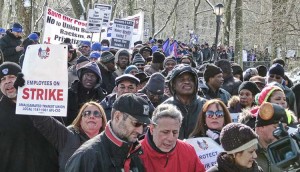 Marchers chanted, “What do we want? EPP!” — referring to Bloomberg’s attempt to scrap the union’s job seniority list known as the Employee Protection Provision. Placards read “Bloomberg: Stop bullying our families!” and “Where is the money really going? Open the books!”

In a YouTube video, one worker said, “We’re here for our families, as well as for your families and your child. Your child is our child when they’re in our hands.”

The composition of the ATU Local 1181 is 60 percent women — 95 percent of the matrons are women — and 80 percent people of color, with Haitian the most common nationality.

As thousands of Haitian, Latina/o and other workers marched through lower Manhattan, people could see how a billionaire mayor, one rich enough to buy himself a third term, is blocking the job security of workers whose average salary is $35,000 a year — and endangering the safety of schoolchildren in order to push through an austerity plan.

From the school bus strike to the so-called fiscal cliff, the banks are mandating austerity for every level of government: the post office, public education, public hospitals, Medicaid, Medicare, school bus service. With the capitalist crisis deepening — and money for war and repression only increasing — banks want to make sure they continue to get their interest payments every month.

In New York, the city pays banks about $14 billion a year in debt service. The city’s education budget is $1.1 billion. As low as the school bus drivers’ wages are, Bloomberg’s plan to scrap the EPP would mean that in a best-case scenario, the drivers and matrons would have to apply for their jobs at a lower rate, without their accumulated seniority and benefits.

The worst-case scenario, of course, is that they would lose their jobs altogether.

Parents don’t want this for their children, which is why many marched in the Feb. 10 demonstration. The group Parents to Improve School Transportation was out in force, with banners, placards and a speech by co-founder Sara Catalinotto.

To cheers, Catalinotto said from the stage, “Bloomberg needs to know that the parents blame him for this mess.” She also declared that parents would be at the city’s opening bid for new school bus contracts. “Parents are going to be there. [The city] told us we can’t go, but we’ll be there.”

“We parents are stakeholders in these contracts,” Catalinotto stressed. “We should be a party of interest. We want to be at the table — and we want to see what’s going on under the table!”