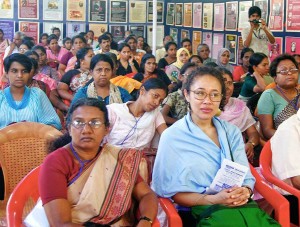 Thiruvananthapuram, Kerala, India — Just a month after the horrific gang rape of a young woman in Delhi, India, sparked militant marches of thousands throughout the country, a national conference of Indian women was held to build, organize and strengthen the anti-imperialist women’s movement. Some 1,200 delegates from across India attended the 3rd All-India Women’s Conference, held Jan. 29 – 31 and organized by the All India Mahila Samskarika Sanghatana.

The AIMSS conference opened Jan. 29 with a massive procession of women marching through the streets of Kerala, carrying banners and signs denouncing the many atrocities committed against women on a daily basis. Their male supporters marched at the back of the procession behind the women.

Dr. H. G. Jayalakshmi, national general secretary of AIMSS, greeted the “mothers and sisters” present at the opening session following the procession. She described AIMSS’s long legacy in the struggle for women’s rights in India. In 1996, for example, when a corporation wanted to hold a beauty pageant in Bangalore, India’s third most populous city, AIMSS led a successful struggle to prevent the pageant from happening, saying it was anti-humanity and a disgrace to civilization. Jayalakshmi recalled, “[Pageant organizers] said they wanted to put Bangalore on the world map. We said we will put it on the map — through our movement.”

“This is a happy occasion,” Jayalakshmi stated. “At a time when the problems of women are on the rise, here is an occasion that is calling for determined, organized battle.” Jayalakshmi described how attacks against women are perpetuated from “the womb to the tomb.” She raised the issue of feticide, the aborting of fetuses once the fetus’ sex is determined to be female. In India, for every 1,000 male children carried to term, only 914 female children are born due to this practice.

Once a female child is born, Jayalakshmi stated, she faces the possibility of multiple attacks against her, from dowry crimes — in which women are killed, tortured or mutilated if their families don’t pay a dowry to her husband — to honor killings, acid attacks and rapes. When women go to report these atrocities, she said, the police ask them, “What were you wearing? Why were you out at night? What is your character?”

With such attitudes toward women, Jayalakshmi stated, crimes against women will only increase. She noted that India is an imperialist country, which exploits the countries surrounding it, and that the imperialist perspective and culture contribute to these patriarchal attitudes. Of the 650 cases of rape reported in Delhi — which includes India’s capital, New Delhi — only the perpetrators of the recent, highly publicized case have been punished.

Jayalakshmi asserted, “It is sad to recall the crimes against women, but there is a silver lining – thousands of men in women in Delhi are demanding justice, and not just for the young woman who was gang-raped. We are the true inheritors of all the great women fighters in history, from Joan of Arc to Marie Curie and Lucy Parsons. We have to build a better society for ourselves; we have to play a significant role in forming a new society.

“We are not anti-men,” Jayalakshmi continued. “We want to work hand-in-hand with men. We need the support of men, and have great respect for men.” Men did in fact play a significant contributing role to the conference, with remarks by such esteemed and respected leaders as Justice Suresh Hosbeth, former Chief Justice of the Bombay High Court; Manik Mukherjee, general secretary of the International Anti-Imperialist and People’s Solidarity Coordinating Committee; and Provash Ghosh, general secretary of the Socialist Unity Centre of India (Communist).

AIMSS President Chhaya Mukherjee echoed Jayalakshmi’s sentiments. Describing the mostly young people — both men and women — who took to the streets in Delhi, she stated, “If these forces come together to fight, we will destroy capitalism itself.”

Another issue facing women in India is the construction of nuclear plants and the damage they cause to Indian communities. Meera Udayakumar, a leader of India’s anti-nuclear movement who gave the inauguration for the conference on Jan. 26, described efforts to prevent the building of a nuclear plant on the border between the states of Kerala and Tamil Nadu in the south.

Udayakumar stated that the U.S., France, Australia and south Korea are all attempting to sell nuclear reactors to developing countries. These plants are only useful for 40 years, and the cost to decommission them and ensure their safety after they have been decommissioned is higher than the cost of building the plant itself. A years-long struggle of women, children and men in this border area has effectively prevented the building of the nuclear plant. However, the Indian government continues its attempts to install the plant there.

Cultural performances provided a strong political component at the conference. At the closing session Provash Ghosh, the general secretary of the Socialist Unity Centre of India (Communist), underscored the importance of culture to political resistance by stating that “you cannot free women with one speech or pamphlet.”

This was reflected throughout the entire event, with classical dance and music performances, dramatic plays and even a magic show that highlighted current women’s problems and the historic misinterpretations and manipulations of Indian tradition to demonize women. In the buildup to the conference, AIMSS organizers held some 65 plays throughout the country to highlight women’s issues and encourage participation in the conference.

An Artists’ Camp was held in Kerala in the weeks leading up to the conference, with artists creating and displaying works that challenged women’s oppression. These works were on display throughout the conference. A visual “Women in History” exhibition presented a Marxist interpretation of the historical subjugation of women through the emergence of private property and featured descriptions of many women warriors throughout history, from Kitturu Rani Chennamma, an Indian woman who led an armed rebellion against the British in 1824, to Lucy Parsons, Hellen Keller, Rosa Luxemburg and women artists, poets and sculptors from around the world.

Many conference participants and organizers told this reporter that due to a compromise at the time of India’s independence, the country had had a political revolution but not a cultural one. One of the goals of AIMSS, therefore, is to change the patriarchal nature of Indian society, which was inherited in part from the legacy of British colonialism.

With the eyes of the world focused on the Indian women’s movement following the response to the gang rape in Delhi, the Indian government attempted to stifle the message of the conference. While unable to prevent the conference from occurring, the government took a series of actions to prevent international delegates from attending and participating.

The government told conference organizers that any international delegate with a tourist visa, as opposed to a conference visa, would not be permitted to speak at the opening session on Jan. 29. This session, which set the tone for the rest of the conference, was held in a large open field and had the maximum representation of delegates. This tactic represented the Indian government’s attempt to prevent the encouraging voices of international solidarity from reaching the ears and hearts of the Indian delegates.

At the same time, the Indian government manipulated the visa process to prevent international delegates from attending and hearing the voices of their Indian sisters. Upon applying for a conference visa to attend the AIMSS conference, U.S. delegate Elena was told that her references as well as the references to the conference would have to be reviewed — a process that would take from one to six months. This delay effectively denied her participation in the conference.

Nonetheless, delegates from the Democratic People’s Republic of Korea and from Nepal spoke at the important opening session. Ri Kyong Sum from the DPRK expressed her country’s desire “to strengthen the bonds of women in Asian countries.” In a later panel, she described how women are equal in all respects in the socialist DPRK.

Sita Pokhnel, of the All-Nepal Women’s Organisation Revolutionary in Nepal, described how women made up 40 percent of the People’s Liberation Army, which overthrew a 200-year-old monarchy in her country. These actions, Pokhnel said, showed “how the hand that is supposed to rock the cradle can rock the whole world.” Since that revolution, women now hold 33 percent of the seats in Nepal’s Constituent Assembly. Pokhnel said they are now fighting to increase that number to 50 percent.

Delegates from the Socialist Women’s Front of Bangladesh and Workers World Party in the U.S. — both of whom had tourist visas and were therefore prevented from speaking at the opening session — were able to speak at a Jan. 30 delegate session entitled “Women Against Imperialist Onslaught,” as well as a question-and-answer session for Indian delegates to interact with delegates from abroad. The majority of questions were directed to the DPRK delegates, with women from India excited to interact with women from a socialist country and curious to know how women’s rights were achieved there.

Dowell, the U.S. delegate, represented Workers World Party at the AIMSS conference. Her talk, along with Elena’s, can be read in their entirety on workers.org.