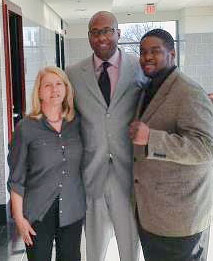 Charges of criminal trespass were dismissed today on Rev. CD Witherspoon and Sharon Black, who were arrested [while] delivering a letter from the Baltimore Peoples Power Assembly to the Mayor’s office on Aug. 6. [The letter stated] demands and issues voted on at the June 30 Peoples Assembly [regarding] recreation center closings, police killings, and jobs.

At that Peoples Assembly, over 142 people voted to hold a “Unity March” to press forward on these critical issues. As part of that effort, the organization drafted a letter expressing their demands and a request for an emergency meeting. Just four days later recreation centers in the city were slated to be closed.

Attorney J. Wyndal Gordon stated, “Congratulations to civil rights activists Cortly CD Witherspoon and Sharon Black on their acquittal of charges arising out of their right to protest government. These activists marched on City Hall on August 6, 2012, and risked their liberty to demand that fire stations and recreation centers stay open, plans for youth jails shut down, funding for educational programs, jobs for the unemployed, and justice for victims of ‘Blue Crime’ (i.e., police brutality).”

[Gordon] continued: “In August 2012, [the Baltimore Police Department] shot 10 people and killed eight. BPD was averaging at least one killing per month. [But] Gregg Bernstein’s State’s Attorney’s Office was relentless in the prosecution of this case, which many felt was politically motivated to silence and make examples of Black and Witherspoon. However, we were even more relentless in our defense. At the close of the State’s presentation of evidence, we moved for judgment of acquittal, and it was granted. The State brought in some of their top brass and SWAT members to testify and still failed to even prove ‘probable cause.’ Not Guilty! Another victory for the struggle!”

Witherspoon and Black [said]: “We owe this victory to the power of the people; to the continuing support of countless people who have picketed and protested around these issues. We are equally grateful for the work of attorney J. Wyndal, who proved in action why he is the ‘Warrior Lawyer.’ Together the people will prevail.”