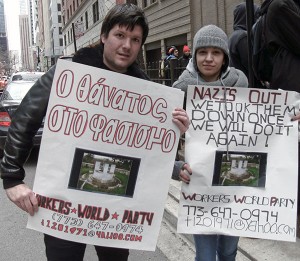 Workers World Party activists at Jan. 19 anti-fascist protest. Sign, left, reads, “O thanatos sto fasismo!” (death to fascism!), with picture of the Meligala well. Meligala is a Greek town that was liberated in 1944 by ELAS, the communist guerrilla army, who executed all the Nazis and threw their bodies down the well.

Chicago  — About 100 concerned anti-fascists showed up Jan. 19, a very cold winter day, to demonstrate at the Greek consulate in Streeterville against the rumored opening of a Golden Dawn office here. That fascist group had already tried to open an office in Queens, N.Y., which is home to a large Greek community and the county with the most immigrant communities in the U.S.

Golden Dawn is a neo-Nazi party from Greece that has a violent history of attacks on immigrants, homeless people, and lesbian, gay, bisexual, transgender, queer communities. Golden Dawn members reportedly worked with Greek cops to attack leftist anti-austerity demonstrations and even physically attacked a woman representing the KKE (Communist Party of Greece) on a television talk show.

Chicago, a city that is nearly one-third African American and one-third Latino/a, has no room for violent, Hitler-loving, immigrant-hating racists. Many Hellenic-Americans who showed up to oppose Golden Dawn fascism told stories about how their relatives fought the Nazis and their Greek collaborators, often paying the ultimate price for their opposition to fascism.

The demonstration was part of an International Day of Solidarity Against Fascism and Racism called by progressive and revolutionary forces in Greece. Many different organizations and individuals in Chicago answered this important call, including members of the Gay Liberation Network, Teamsters for a Democratic Union, the Service Employees union, Workers World Party, Freedom Road Socialist Organization, the American Party of Labor, Occupy Chicago, International Workers of the World and the International Socialist Organization.

The Chicago/Greece Antifascist Working Group, one of the organizers of the demonstration, issued this statement:

“Chicago is known as a city of immigrants, and today the people of our city and our nation confront the same threats that the people of Greece confront — a rising tide of state-sponsored repression, extreme austerity measures designed to serve the rich and impoverish the rest of us, and a growing wave of right-wing extremism. As in Greece, we face a police infrastructure and government policy that serves its corporate masters with attacks on people of color, immigrants and any who challenge the power of the elites.

“In Chicago, we also confront the aspirations of the neo-Nazi Golden Dawn party to expand its operations into our city. We have a simple response to the elites and the Golden Dawn fascists who serve their interests: No pasaran! [You shall not pass!].”

Progressives, revolutionaries and anti-fascists in Chicago will continue their vigilance against the Golden Dawn fascists.