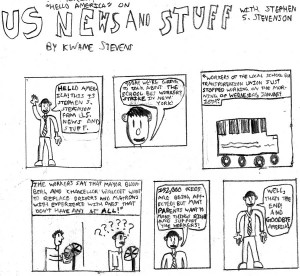 New York — More than 8,000 school bus drivers and matrons who transport 152,000 pupils in this city every day, many of them children with special needs, were forced to go on strike Jan. 16 to protect not only their jobs but also the safety of the children they serve.

Mayor Michael Bloomberg, the Wall Street mogul who owns Bloomberg News, left the drivers no choice when he and his Board of Education head, Chancellor Dennis Walcott, refused to negotiate further with Amalgamated Transit Union Local 1181 over the issue of seniority and job security.

The New York State AFL-CIO, in a statement supporting the bus drivers, says that “the union’s hand has been forced by Mayor Bloomberg, who requested bids for contracts without critical safeguards that help ensure our children’s safety. For the first time in 30 years, the mayor has removed a requirement that keeps the most qualified, experienced, and skilled drivers on the job.”

This is a struggle against austerity, as well. The city is trying to save money by no longer requiring that companies bidding for contracts keep the current drivers and matrons who have experience and skill handling small children, including those with disabilities. It’s a disgrace that in the same city where Wall Street funnels trillions of dollars into the pockets of the super-rich, the administration claims it can’t find the money to get children safely to school.

Besides setting up 24/7 picket lines at locations around the city, union members are handing out palm cards explaining the issues and asking the public to sign an online petition supporting the workers. Information about where to join the pickets can be found at nysaflcio.org/strike-supportpicket-locations; the petition can be signed at nysaflcio.org/safety1st.

Resolutions and picket line solidarity are coming from other New York unions. U.S. Labor Against the War has also supported the strike, as has Local 8751 of the Steel Workers union, which represents school bus drivers in Boston who have struck successfully over similar job security wording in their contracts.

Since this struggle started, the mayor and school board head have tried to turn parents against the bus drivers’ union. But many parents are expressing their support for the drivers and matrons, understanding that the hardships their children face are caused by city officials, not the workers and their union.

One organization that has been wrestling with the school board over its complicated bus routes and schedules, which have caused children to spend unnecessary hours en route, is Parents to Improve School Transportation.

On the first day of the strike, PIST sent out a release, saying, “‘As the parents and guardians of NYC school children, we support the school bus union members who, to protect their careers, have been forced to strike by the mayor and the DOE,’ said Sara Catalinotto of Parents to Improve School Transportation. …

“‘We strongly doubt the city’s claim that it is dropping the Employee Protection Provision to raise money for classrooms. The EPP is a seniority list, ensuring that the most experienced drivers and matrons will be employed first to transport our children — many of whom are students with disabilities. Including the EPP in contracts does not cost the city any extra!’ …

“Sharlene Figueroa, mother of three children who ride mini-wagons, concluded, ‘Corner-cutting by the DOE under mayoral control has already lowered busing standards. It’s not an accident that we are PIST.’”

PIST sponsored a strategy meeting at the disabled-accessible ATU 1181 hall on Jan. 19.  Attending were parent leaders; unionists who work for city agencies, schools and mass transit; senior school bus drivers; and a member of the group 99 Pickets. Children in the meeting created artwork about the strike, which was delivered the same afternoon to two picket sites, along with food donated by Communications Workers Local 1180.

The mayor has tried to minimize the hardships imposed on children and their parents by this struggle. He has trumpeted his plan to provide Metrocards and supposed alternate means of transportation. But a sharp drop in school attendance by children with disabilities — many of whom cannot possibly use public transportation — shows how important it is that the super-rich who run this city abandon their attempt to undercut workers with seniority and experience.